Tshisekedi was to "raise the questions of strategic partnership" between the DRC and the United States during the meeting. If the statesmen also discussed bilateral trade and investment, partnerships for regional security was top of the agenda.

Congo has accused Rwanda of supporting the M23 fighters. A rebel group operating in eastern DRC.  During a press conference with his Congolese counterpart, Christophe Lutundula,  the US top diplomat expressed concern about allegations of Rwandan support to the M23 rebels. Rwanda, rejects a report by United Nations experts saying they have "solid evidence" which incriminates the mountainous nation.

"We are very concerned by credible reports that Rwanda has provided support to M23. We call on all parties in the region to stop any support or cooperation with M23 or, for that matter, any other non-state armed group, Blinken said. [...] Any entry of foreign forces into the DRC must be done transparently with the consent of the DRC."

US's top diplomat said his country will support the efforts led by Kenya and Angola to put an end to the violence in Congo’s east and to help solve the central African nation’s crisis with Rwanda.

Rwanda has denied the allegations of support to the M23. Kigali accuses the DRC of collaborating with another rebel group, the FDLR, and said regional security can’t be achieved until that issue is addressed. The FDLR was created by ethnic Hutus who fled Rwanda during the country’s 1994 genocide that killed at least 800,000 ethnic Tutsis and moderate Hutus. Congo has denied supporting the group.

Another topic on the table was climate change and the conservation of what’s considered the second most important forest in the world. Congo’s government was criticized last month when it opened an auction to explore 30 blocks of oil and gas located in the Peatlands in the Congo Basin forest.

"The United States and the DRC will quickly set up a working group on climate change that will be a framework for consultation and joint action, Congo's Lutundula announced. This also is a guarantee, it is a structure that will help us reconcile the need for the Congolese to enjoy its natural wealth and to protect the common heritage of humanity."

Antony Blinken will also meet civil society groups. He announced that DRC has joined the Feed the Future program, which deals with the food crisis caused by climate change, COVID-19 and the war in Ukraine.

Blinken will travel Wednesday to Rwanda to meet with President Paul Kagame and his Foreign affairs minister. 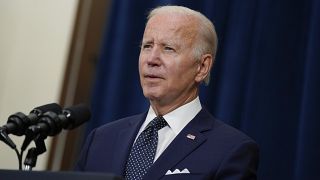