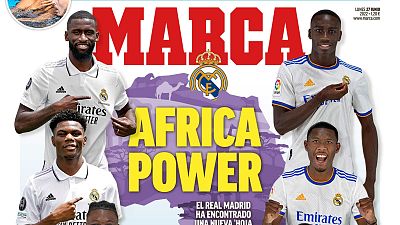 The headline in the Spanish sports daily Marca on Monday outraged many Europeans. However, in Africa, a feeling of pride prevails when seeing the continent as the main provider of talent for the biggest club in the world.

It is a fact that Aurélien Tchouaméni (parents are of Cameroonian origin), Karim Benzema (Algeria), Ferland Mendy (Senegalese father, Guinean mother) were born in France. Eduardo Camavinga, although born in Cabinda, grew up in France, Antonio Rüdiger (Sierra Leonean on his mother's side) was born in Germany and David Alaba (Nigerian on his father's side, Filipino on his mother's side) in Austria.

Their roots are African and this is what the Spanish newspaper is selling: "They boast of having African roots although they grew up far from the continent. They reinforce a path that was opened with Eto'o, Geremi, Zidane, Makelele or Diarra."

Players proud of their origins

Each of them has had the opportunity, long before this paper, to express his attachment to the country of his parents.

Ferland Mendy, for example, is the cousin of Edouard Mendy, African champion with Senegal and celebrated by all of Senegal for his victory in the 2021 Champions League, although he himself was born in France. In what way would the left-back of Les Bleus be less African than another member of his family?

Eduardo Camavinga, X factor of the incredible Madrid epic this year, was born in Africa, in Angola, where his family was found after fleeing the DRC. He left for France at the age of two, but only obtained French nationality in September 2019, when he was 17 years old.

Camavinga's team mate Karim Benzema, candidate No1 for the Ballon d'Or this year, has never hidden his love for Algeria, the country of his parents, saying "it's also my country" in an interview a few years ago had also earned him strong controversy in France, as if his status as French international should lead him to deny his origins.

During the last French team gathering, the latest Madrid recruit, Aurelien Tchouameni, was unambiguous in a press conference: "Yes, of course I support the Indomitable Lions during the African Cup of Nations, it's also a part of me because both my parents are of Cameroonian origin, I myself have had the opportunity to go to Cameroon quite a few times, I was there again last winter."

As for Antonio Rüdiger, his first reaction after winning the Champions League with Chelsea a year ago was to grab the flag of Sierra Leone and his last trip "back home" had raised the crowds like the noticed passage last week of French world champion Paul Pogba in Guinea.

Africans proud of their ambassadors

Joel Kouam, Cameroon correspondent for Africanews, recalls that the Lions' best current player is none other than Karl Toko Ekambi, born in Paris, and adored throughout the country. "Here in Cameroon, we are proud to see Tchouameni recruited at a high price by Real Madrid, it is a pride to see the biggest club in the world become Africanized," he adds.

Until a few years ago, with the exception of Eusebio in the 1970s (a club legend, Portuguese but originally from Mozambique), Samuel Eto'o Fils had become the first player of color in a long time to wear the mythical Madrid uniform. Trained by the White House, he never really had a chance there before being sent to rival Barcelona.

In 2015, the influential player agent Santos Marquez, former counsel to the Cameroonian but also to Claude Makelele (French international but born in Kinshasa), had denounced the attitude of the president of Real Madrid, Florentino Perez, towards black players: "He is not racist, but he does not like them. I fought with him over the Eto'o case. He left because of the color of his skin."

But since then, African stars have come and gone at the Merengue. Makelele's reign opened the way for many hard-working midfielders, we saw the Cameroonian Geremi Njitap, the Ghanaian Michael Essien, the Franco-Malian Lassana Diarra or the Malian Mahamadou Djilla Diarra shine in the middle. And how can we forget the Kabyle Zinedine Zidane, who has become a myth at the Bernabeu in the center of the field or on the bench.

The Togolese Emmanuel Adebayor has scored 8 goals in 22 games for the immaculate shirt.

Like the Cape Verdean international Valdo Lopes Rocha, the Moroccan Achraf Hakimi, a native of the Spanish capital, launched his career at Real. The first one was born in Pamplona, while the second one is now shining at PSG after having launched his career in Dortmund and then in Milan because of the too great competition in defense.

A "South America Power" would not have shocked anyone

Finally, the main criticism of the front page of Marca is the map of Africa in the background, which did not deserve symbols as useless as clichés, between zebras, giraffes and acacias. The only point that can agree with the "uncomplicated racism" expressed in many French media on Monday.

But can we find it "scandalous" to consider that Real would have a new recruitment policy? No one was offended when it was pointed out that this or that club had built its success on its South American network, like Lyon in the 2000s with its Brazilian colony or the recent PSG with its horde of Spanish speakers for example.

Wahani Sambou Johnson, soccer specialist for Africanews, says he is "not shocked at all. If we just judged their performances on their skin color, it would be a problem. "Today, it is just unprecedented to see so many Africans in Real and it is a mark of openness. Barriers seem to be falling to make way for a new era, let's rejoice." Sambo stressed.

Sometimes the debate about origins also shifts to Africa, especially on the issue of dual nationals. We regularly see Congolese, Cameroonian, Guinean and other supporters arguing about the merits of bringing in French, Belgian or Spanish players at the expense of native-born players.

As is often the case, the issue is settled on the field and if Aliou Cissé has been much criticized by his fans for having gone to find a score of "Europeans" to fill the Lions' den. No one thought to blame Kalidou Koulibaly for lifting the first CAN of the country, he is the native of Saint-Dié-des-Vosges, an obscure town of deep France.