**King Philippe of Belgium's last stop of his six-day visit to the DRC is in Bukavu, in the eastern South Kivu province.**Residents have been asked by authorities to repaint their houses and close some of their shops along the sovereigns' route. Measures denounced by some locals.

"_It's not a bad idea to paint the houses but the whole town is in a panic because vendors on the king's route are being told they must not work on the day he comes._Even if the king comes, we also need to work to find food! We ask the author ities to let us work. We see that they are waging war on us, whereas the king is coming in peace.", comments Gustave Mulonda, a fuel vendor. Although Bukavu resident Koko David says it an "honour" to greet the first Belgian king since colonial time, he calls these measures are "hypocritcal" while another local, Drio Kalongo deplores some families "will have no food today" because of the closing of numerous shops.

In Bukavu, King Philippe and his wife will also meet with gaenocologist, Nobel Peace Prize and natonal hero Denis Mukwege in his Panzi hospital. 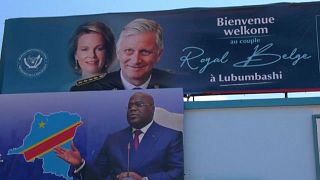 King Philippe of Belgium arrived in Lubumbashi in DR Congo

King Philippe of Belgium arrived in Lubumbashi in DR Congo