Suspected rebels attacked a village in eastern Democratic Republic of Congo with machetes and guns, killing at least a dozen civilians on the night of Sunday 3 April.

Congo’s army has now confirmed the attack. The army on Monday said fighters believed to be part of the Allied Democratic Forces ADF rebel group staged the attack Sunday night in Masambo, 50 kilometers (31 miles) away from the north eastern city of Beni in North Kivu.

People in this community and more across Beni and other major towns in the North eastern part of Congo are reeling from the attacks.

The attack by suspected ADF rebels based in Uganda, comes a few days after the start of the trials of about a dozen rebels who were captured in combat by Congo’s army and were brought to Beni.

General Patient Mushidi Yav, Deputy Commissioner General in charge of the administrative police paid a visit to one of the affected communities on Monday.

"(The visit to Rutshuru) It gives me the strength to go back to Kinshasa and prepare other elite troops to come and stay there, where it hurts. Let me tell you that we will leave the office in Kinshasa to come and die here because this is part of the national territory." the Deputy Commissioner said.

The Uganda-based ADF rebels have been active in eastern Congo for decades and have killed thousands in the region since they resurfaced in 2013.

In December, Uganda sent more than 1,000 soldiers to fight with Congo’s army against ADF rebels in the region. 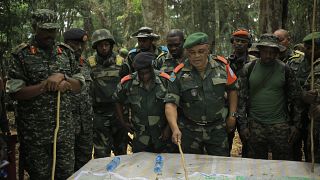