Security forces are reportedly fighting off armed men in the green-zone of the Somali capital's airport, witnesses told AFP. At the same moment, jihadists from the Shebab group have claimed they are carrying out an attack on the Halane camp, which houses embassies.

"There are gunshots in the vicinity of the airport and we are hearing that it is an ongoing attack involving gunmen (...) The security forces are engaging them now," Mohamed Ali, an airport security official, told AFP. 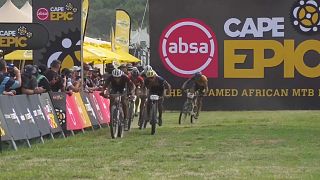