The nation's library, musical artists and American leaders honored pop music icon Lionel Richie in Washington, as he was awarded the Library of Congress Gershwin Prize for Popular Song during an all-star tribute concert Wednesday.

"I'm right now feeling that the hug of all of those wonderful people who I grew up with, the Tuskegee Airmen again, who didn't get their proper due the entire time they were alive," Richie tells The Associated Press about being a native of Tuskegee, Alabama.

Even while celebrating, Richie said he's "frustrated" by the violence of the Ukraining invasion by the Russians.

"It's a shame that we haven't come that far as the human race to move past the point of complete ignorance," he said thinking back of the message of his hit "We Are The World."

"And we are not allowing people on Earth to live together as one. How hard is that? But it seems like we can't get that together. Hopefully, I was hoping in my lifetime, but maybe in my kid's lifetime, but I'm a little frustrated right now."

Luke Bryan was also shaken by the developments.

"To have another country invade another country and really demolish it without any regard for those affected human life and to really put, send the world back 100 years. It's just heartbreaking to me," he said.

Richie is known for his catalog of hits including "All Night Long," "Endless Love," "Lady," "Penny Lover," "Truly" and "Stuck on You." He co-wrote the historically popular song "We Are the World" with Michael Jackson.

Before his superstar solo career, Richie was a founding member of the Commodores, a funk and soul band that made waves in the 1970s. The group had tremendous success backed by chart-climbing hits such as "Three Times a Lady," "Still" and "Easy."

Richie has won four Grammys, an Oscar and the distinction of MusicCares Person of the Year in 2016. He was a Kennedy Center honoree in 2017.

Richie mentored aspiring music artists as a judge on ABC's "American Idol" for the past four seasons. He expects to return for the show's 20th season. 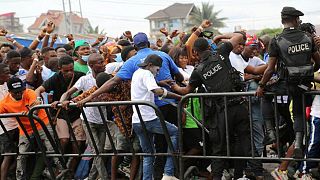