The eight negotiators sent by President Félix Tshisekedi to Ituri to negotiate a ceasefire with armed groups are still being held by the CODECO militia.

They were taken prisoner on 16 February. Among them are two former warlords, Thomas Lubanga and Germain Katanga who were previously convicted by the International Criminal Court (ICC) for war crimes and crimes against humanity in the early 2000s.

They were captured in the territory of Djugu, the militia's headquarters.

Since then, the authorities have been trying to obtain their release, but the militiamen have set conditions.

In addition to an amnesty for its fighters and their integration into the regular army, the CODECO militia has asked for the lifting of the state of siege that has been in place for ten months in Ituri, but also for a halt to military operations in the same province.

These demands according to analysts seem difficult for Kinshasa to meet and for the moment it is ruling out the release of hostages by force.

According to the Minister of National Defence, the negotiations are nevertheless progressing positively. He is even optimistic and says that the talks could soon reach a successful conclusion. The negotiations have been conducted for a fortnight from a distance. The authorities have appointed another former warlord as mediator.

Since their capture, the hostages have been taken to Gutsi, one of the militia's strongholds. This weekend, images of the captives were shared on social networks as proof of life. Thomas Lubanga and two other hostages are reportedly ill and without treatment, according to a government source.

According to the Codeco militia, the emissaries were held because the army, on the orders of the military governor, had carried out bombing raids in the area close to where the talks were being held. This accusation was rejected by the political-military leader. 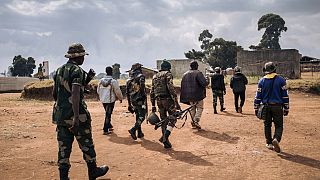