An explosion caused by a truck carrying explosives for a mine killed at least 17 people and injured 59 others Thursday and devastated a town in western Ghana, the government said.

The explosion occurred around noon Thursday in Apiate, not far from Bogoso, a mining town in the Western Region, about 300 kilometers west of Accra, the capital of the mineral-rich West African country.

Videos authenticated by AFP show a large crater, blown houses and debris strewn across the ground for hundreds of meters. Several lifeless bodies, some dismembered, are visible and testify to the violence of the explosion.

According to the first elements of the investigation, it was "an accident involving a truck transporting explosive materials for a mining company, a motorcycle and a third vehicle that took place near an electrical transformer and led to the explosion," said Information Minister Kojo Oppong-Nkrumah in a statement issued Thursday night.

"It's a black Thursday. So far, 500 houses have been affected. Some have been completely leveled by the blast while others have developed cracks," Sedzi Sadzi Amedonu, deputy coordinator of the National Disaster Management Organization, told AFP in the evening.

"It's almost like a ghost town now. Some houses have been burned, others have been covered by debris, and search and rescue operations are still ongoing," he added.

Survivors of the explosion, interviewed by the local press, told of scenes of desolation.

Like Abena Mintah, who explained that he ran to the scene of the accident to see if he could help rescue any victims.

"The driver of the truck carrying the explosives ran towards us to tell us to stand down and a few minutes later we heard a loud bang," he explained.

"I became dizzy and fell into the bush. I managed to get up and saw several dismembered bodies in the street," said the witness, who suffered minor injuries to his feet and hands.

In order to avoid a second explosion, the authorities have deployed a joint team of police and military experts. They "will examine the situation and put in place security measures," the government said.

Authorities have asked residents to move away from the blast site and evacuate to surrounding villages. Schools and churches were opened for them to stay overnight.

By late afternoon, Ghana's President Nana Akufo-Addo had lamented on Twitter "a truly sad, unfortunate and tragic event", and offered his condolences to the families of the victims.

Deadly accidents related to the mining sector are common in Ghana, but most often involve the collapse of artisanal mines, mostly illegal.

In June, at least nine people died in the collapse of such a mine in northern Ghana.

Ghana is Africa's second-largest gold producer, after South Africa. The country's mining industry involves both large global players and artisanal mining, many of which are illegal. 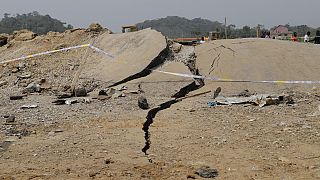