Four people, including a baby, were killed and at least 12 wounded Monday in Goma, in the eastern Democratic Republic of Congo (DRC), during a day of "dead city" action triggered to protest criminality, authorities, and hospital sources said.

The demonstrators were also protesting against the alleged presence of Rwandan police in Goma, strongly denied by the authorities.

Early in the morning, demonstrators invaded the main streets of the capital of the North Kivu province, bordering Rwanda, setting fire to tires and erecting stone barricades on the road, an AFP correspondent noted.

"These acts will not go unpunished," General Ekenge said.

A neighborhood leader and a police source who requested anonymity said that one protester, a motorcyclist, had been shot dead.

And "here at the hospital, we have recorded 12 wounded and one dead, a child less than a year old who was shot while on the back of his mother, who was wounded," said Serge Kilumbiro, manager of the CBCA hospital in the Ndosho district.

Activity in the city remained paralyzed throughout the day, with streets barricaded, stores, banks, schools and the central market closed.

Youth movements in Goma had called for a "dead city" day on Monday, to protest against "growing criminality". Several violent incidents have occurred in recent weeks, including the death of a currency trader on December 14 and a robbery that left two people dead and several injured on December 16.

They are calling for an "uncompromising assessment" of the effects of the state of siege declared in early May in North Kivu and neighboring Ituri provinces in an attempt to end the violence of armed groups that have been scouring the eastern part of the country for more than a quarter century.

But they also say they are "categorically opposed to the entry of Rwandan police into the city of Goma," as a memorandum of understanding signed early last week in Kigali by the Rwandan and DRC police for better cross-border cooperation to fight various forms of trafficking may have suggested.

"We are not going to support the arrival of the Rwandan police in Goma. What are they hiding from us?" said Paluku Issa, a protester in Ndosho. "Who has forgotten that the Rwandan army was behind the rebels here? They are laughing at us!" said another, Jemba Uchu.

It is out of the question that Rwandan policemen come to maintain order in Goma, "it's a lie on the whole line", the general commissioner of the Congolese national police, General Dieudonné Amuli Bahigwa, said in Kinshasa on Saturday.

"By what magic did the Rwandan police arrive here?", General Ekenge also asked on Monday, deploring the "intoxication and manipulation" surrounding the agreement reached in Kigali. 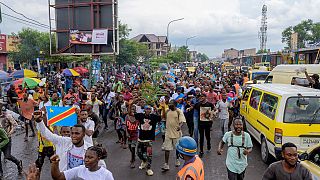 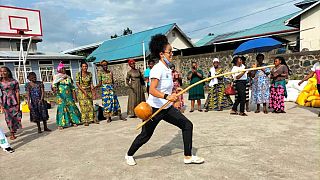