Veteran Kenyan politician Raila Odinga announced Friday he would make his fifth bid for the presidency in next year's election, ending months of suspense following a surprise truce with his former foe, President Uhuru Kenyatta.

The announcement at a Nairobi stadium packed with political bigwigs and thousands of supporters followed speculation that the 76-year-old -- who was the face of Kenya's opposition for decades -- had struck a power-sharing deal with Kenyatta to secure his backing for the top job.

"I do hereby accept to present myself as a presidential candidate for the presidential elections of the 9th of August 2022," he declared to loud cheers, adding that he was committed to building a "democratic and progressive Kenya in our lifetime".

But his fiery anti-establishment image took a knock in March 2018 when he stunned the country by clasping hands with Kenyatta just months after deadly post-election clashes.

The truce, known universally as "the handshake", sparked speculation the two men had made a pact that would see Odinga succeed Kenyatta, a two-term president who cannot run a third time.

The two leaders also sought to expand the executive through proposed constitutional changes that would have potentially allowed Kenyatta to stay in power as a prime minister.

But despite Kenya's top court ruling against the proposed amendments in August, the unexpected alliance has persevered with Odinga attending official government functions with Kenyatta.

Observers say Odinga now faces a threat to the brand he has spent decades cultivating, battling for democracy and spending eight years behind bars under the autocratic regime of Daniel arap Moi.

"He has some convincing to do, to a group that has always seen him as the opponent, and to those that support him, that he still has their interests first," political analyst Nerima Wako-Ojiwa told AFP.

"It will be a tough balance, and one of the two is bound to receive the short end of the stick."

He will face a tough fight against his new and much younger rival, Kenya's Deputy President William Ruto, who was previously promised Kenyatta's backing for the top job in exchange for his support.

Ruto, 54, has positioned himself as a leader looking to upend the status quo and stand up for the "hustlers" trying to make ends meet in a country ruled by "dynasties".

The Kenyatta and Odinga families have dominated Kenyan politics since independence in 1963.

In an interview with AFP in September, Odinga said he was confident of his ability to win over voters.

"I have a track record which Kenyans understand very well," he said.

"They know that given an opportunity as the head of government, I can introduce a lot of changes." 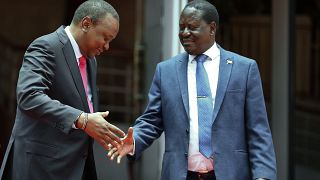