In Chad, the military-led government issued an amnesty to almost three hundred rebels and political dissidents.

The amnesty meets a key demand of opposition groups invited to join a round table with President Mahamat Idriss Deby Itno who took power after his father was killed fighting insurgents last April.

"This reassures the rebels, the politico-military groups I mean, because without this amnesty, they will feel insecure, so it's an act that can reassure these politico-militaries and also help the state in its objective, its mission of wanting to bring all the country's sons and daughters together on the same table for an inclusive dialogue", says sociologist Agassiz Baroum.

Many politician's see this amnesty as a first step towards national reconciliation.

"It is a good thing, it is a good step that will allow us to go far in the framework of national reconciliation. (...) The government should also think about other prisoners of war who are there, especially those who were captured during the events of April 20th", concludes politician Yacoub Adam.

The handover of power to the younger Deby was endorsed by Paris, and supported by the European Union and African Union.

Considered to have the best military in the Sahel, Chad is a key country in France's anti-jihadist campaign in the region. 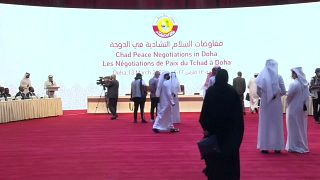