In Benin's small coastal town of Ouidah, an initiative employs people with disabilities to transform fabric scraps into beautiful artifacts sold in big hotels in the small West African country and abroad.

Every morning, Amaké Yessoufou goes around the sewing workshops of Ouidah, a small coastal town in southern Benin, and collects in a large cardboard box scraps of fabric that had been used by the tailors to make clothes.

"If I had to give keywords to describe this work, the first would be "wow". Every time someone comes in, it's "wow". Secondly, there is the fact that this work is done by people with disabilities. The question I am asked is 'how did you come up with the idea of making them work?'. It was normal to me with the condition that the person could not be moving all the time. That was obvious," said Nadia Adanle, "Couleur Indigo" founder.

My husband tells me every time that my knowledge in the field increases day by day and he is amazed at the variety of objects made from these fabric scraps. Only those who know can testify how true this is," said Chantal Gbenagnon, "Couleur Indigo" worker.

Braiding fabric scraps into objects have made a significant difference in the lives of workers with disabilities, most of whom use crutches or wheelchairs.

"What they are doing is perfectly suited to their health issues and the result is that they create beautiful objects, marketable objects that can be used quickly and are found in important chains such as at the MGA residence (hotel in Ouidah) or in other places, in Cotonou, in Europe, in the United States," said Marcel Adjanohoun, Benin tourism developer. 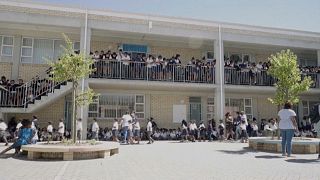