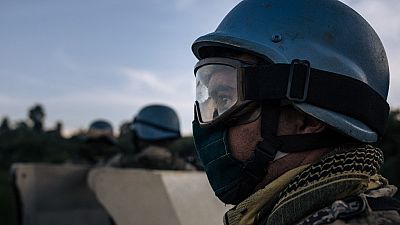 At least four people were killed Wednesday on a road in Ituri (northeastern Democratic Republic of Congo) by suspected Allied Democratic Forces (ADF) rebels, who also set fire to a dozen vehicles that were supposed to be traveling in a secure convoy. About 20 people are still missing.

"An attack occurred this morning on National Road 4, near Ofai (Irumu territory). More than a dozen vehicles were burned. The final human toll is not yet known," experts from the Kivu Security Barometer (KST) said on Twitter, adding that "the ADF are suspected.

The convoy was escorted by peacekeepers from the UN Mission in the DRC (Monusco) and the army, said Dieudonné Malangayi, a local civil society leader. "It was at around 10 a.m. that the ADF rebels cut the convoy in the middle, they attacked the vehicles," he told AFP.

"The ADF killed four people, one of whom was found burned in one of the 13 vehicles that were set on fire" by the rebels, said Lieutenant Jules Ngongo, spokesman for military operations in Ituri. "We managed to recover more than 60 people missing in the bush" after the attack, he added.

In a video seen by AFP, several vehicles are seen on fire or smoking on the dirt road, not far from the houses, while armed peacekeepers patrol the area. The RN4 connects Ituri province to North Kivu province. The vehicles are escorted by security forces because of the presence of armed groups along this regionally important road.

The convoy was supposed to be preceded by peacekeepers and followed by the army, but some vehicles became isolated and were attacked. Lieutenant Ngongo called on the population to respect the time and the instructions for organizing the convoys, adding that the poor condition of the road did not facilitate good traffic flow.

This latest attack has caused more outcry in eastern DRC, where civilians say the ADF is stepping up its attacks. "What is the use of our army? How can we attack a convoy of civilian vehicles when the army has secured them? Without capturing even one rebel?" said Christian Munyanderu, coordinator of a local human rights group.

Accused of killing thousands of civilians in Ituri and neighboring North Kivu province, the ADF were originally Ugandan Muslim rebels opposed to President Yoweri Museveni's rule. They are now portrayed by the jihadist organization Islamic State (IS) as its branch in Central Africa and are considered the deadliest of the armed groups operating in eastern DRC.

Since May, Ituri and North Kivu have been under a state of siege, an exceptional measure intended to halt the activities of the ADF and multiple other groups that terrorize civilians.