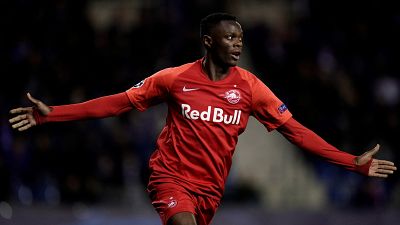 A big move for the great hope of Zambian football- Patson Daka has been signed by EPL side Leicester. Daka now flies to the Premier League after four years in the Austrian championship.

It is a big recruit for the Foxes and there are hopes that a successor to Jamie Vardy is here in Daka. This Wednesday, Leicester City made official the signing of the 22-year-old Zambian striker who leaves the Austrian club RB Salzburg.

The Zambian international has scored 68 goals in 125 appearances for Salzburg and has participated in the last four Austrian league titles. These performances have earned him comparisons with another world-renowned striker who also played for the club: Erling Haaland.

He finished as the best player and top scorer of the last season, scoring 27 times in only 28 league games. His inclusion to the Leicester attack is expected to strengthen of the last English Cup winners for the next five seasons.

The amount of the transfer was not revealed, but the British channel Sky Sports estimated the transaction at 23 million pounds (equivalent to $ 32 million) for the young player

"I'm so excited to join this great club, it was my dream," said Daka in the statement of the club that became English champions in 2016.