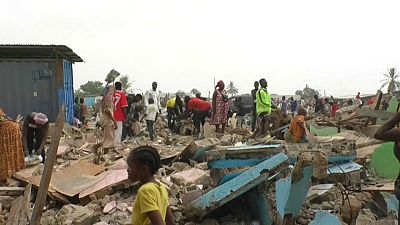 Cameroon police fire teargas at residents during forced evictions and house demolitions in the Douala airport area as the country prepares to host the Africa Cup of Nations in January.

Authorities claimed no responibility for resettling people and many are left homeless to sleep in the open.

"We know we are close to the airport. But they don't have any papers that this land belongs to them. They just want to make things safe. But then shouldn't they make the effort to compensate first those who have lived there for years? But they haven't, they haven't done that." said  Souleymane Ben Jaho, anotherevicted resident.

On 9th of January, more than 100 families, were forcibly evicted from the homes they have been peacefully occupying for more than 35 years.

Critics claim officials should have taken into account the COVID-19 pandemic which is still raging the country. The people, now homeless, will certainly be left to the contagion and spread of the virus.

**"This is the airport's land and the airport has its land title. Here, people have settled illegally and we are proceeding with the eviction and this is done according to the rules of the art within the framework of the law."  said **Hector Eto Famé, assistant to Wouri prefect.

Many of the inhabitants claimed they were victims of the Lake Nyos disaster, which occurred in 1986. These disaster victims were installed by the current President Paul BIYA.