Police vehicles patrolled the streets of Bamako, Mali's capital on Tuesday in a show or state that mirrored the uncertain political developments in the west African nation.

Earlier on in the day, former coup leader Assimi Goita fired the president and prime minister of the transitional government but promised to still hold new elections next year.

The move came a day after the two leaders were arrested by the military following their announcement of a cabinet reshuffle.

Goita's spokesman, Commander Baba Cissé, said in a televised statement that the president and prime minister had acted without consulting Goita.

Cissé called it "a violation of the Transitional Charter", justifying the removal of the head of the country from power.

He explained that Goita was "obliged to act to preserve the transitional charter and to defend the republic in order to remove the president and his prime minister from their prerogatives as well as all those involved in the situation".

President Bah N'Daw and Prime Minister Moctar Ouane were taken to the Kati military headquarters along with others late on Monday. The garrison town sits about 15 kilometers (nine miles) from the capital and is the former stronghold of the junta. Their arrests came just an hour or so after a new government Cabinet was announced.

Notably that cabinet didn't include Interior Security Minister Modibo Kone or Defense Minister Sadio Camara, both junta supporters. No reason was given for their exclusion, but the move suggested mounting divisions within the transitional government.

The African Union, the U.N. mission in Mali, the West African regional bloc known as ECOWAS and other members of the international community have called for their immediate release.

Also, French President Emmanuel Macron on Tuesday condemned as an "unacceptable coup d'etat" the detention of Mali's transitional president and prime minister and warned the EU could impose sanctions quickly.

"We are ready in the coming hours to take targeted sanctions" against those responsible, Macron said after a summit of bloc's 27 leaders

The developments raise new alarm about whether the transitional government will be able to move ahead freely as promised with plans to organize new democratic elections by next February in Mali, where the U.N. is spending $1.2 billion a year on a peacekeeping mission.

The two leaders were sworn in last September after the ruling military junta, under growing international pressure, agreed to hand over power to a civilian transitional government.

The junta had grabbed power in August 2020 after mutinous soldiers encircled the home of President Ibrahim Boubacar Keita and fired shots into the air. He later resigned on national television under duress, saying he didn't want blood to be shed in order for him to stay in office.

The soldiers then went on state television calling themselves the National Committee for the Salvation of the People and promising a swift return to civilian rule. However, Monday's developments appeared to throw that promise into question. 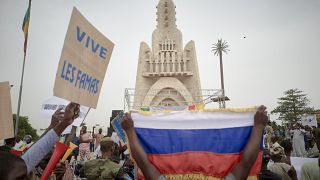