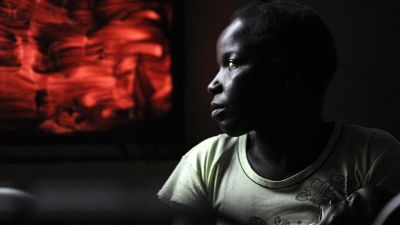 Barely two years old, their faces are already withered, their eyes bulging on a forehead dotted with wrinkles. "How can I feed them enough?" worries a mother at the bedside of her two-year-old twins.

In the Democratic Republic of Congo (DRC), in the diamond-rich Kasai region, malnutrition continues to take its toll in this country, which is now the most food-insecure in the world, according to the UN.

"My husband doesn't work, I only sell water myself," says Claudine Kamwanya, a pregnant mother of four, who has taken her two twins to Bonzola hospital near the large city of Mbuji-Mayi.

In a nearby room, lying on a stretcher, Marie-José, a four-and-a-half-year-old girl, wakes up from her lethargy after 12 days of treatment, to the great satisfaction of the medical staff. "She arrived unconscious, with severe dehydration associated with infections," explains a nurse.

From April 14 to May 1, "29 malnourished children were treated, six of whom were in a severe acute phase with medical complications," explains Dr. Grégoire Mpoyi, who thanks the NGO Action contre la faim (ACF) for its support.

In total, 27.3 million people are affected by food insecurity in the DRC, according to estimates made in early April by the UN Food and Agriculture Organization (FAO) and the World Food Programme (WFP).

- The scourge of poverty -

"This situation makes the DRC the country with the largest number of people in urgent need of food security assistance in the world," the two UN agencies added in a plea with alarmist overtones.

In Mbuji-Mayi, some 15 children with skeletal bodies or swelling from their feet to their faces lay under a mosquito net in a pediatric unit at the general hospital, while their mothers looked on helplessly.

"Four are in the severe acute phase (the most critical), five in the transit phase and six in the rehabilitation or discharge phase," says Dr. Pierre Kasongo, a doctor and director of the hospital run by nuns.

"Malnutrition is a scourge that is in full swing in our poverty-stricken community," he adds. In the space of three weeks, his hospital has treated more than 60 children thanks to the support of ACF, which intervenes in 35 local medical structures.

Mado Kapinga is at the bedside of her little boy, Ntumba Kabengela, who is slowly recovering. "When we arrived here, he was very sick and weak. After three days of treatment, he is better.

This mother of five children and wife of an artisanal miner (digger), however, dreads the return home. "Here, we are given everything: food, water and even soap to wash ourselves. Once at home, we will have nothing to eat, he (her son Ntumba, editor's note) risks having a relapse.

- The mirage of the diamond -

Kasai was shaken by an armed conflict between September 2016 and May 2017 that left 3,000 dead and more than 1.5 million displaced. In a post-conflict situation, the province suffers from a sluggish economy.

Its land -plain clay- is also reputedly less fertile than in other regions, agriculture is often neglected, to the benefit especially of the diamond eldorado.

"People don't work, they don't want to go into agriculture. The vast majority dream of making a fortune in the artisanal diamond industry, despite the obvious fact that diamonds can no longer be picked up," says Sister Carine Kupela, the hospital's general administrator.

The neighboring province of Kasai-Central is not spared. Sitting on her mother's lap, little Jeannette Kabuma swallows the nutritional porridge that a nurse distributes to the twenty or so children who have come for consultation at a health center in Kananga, the provincial capital.

At one year old, Jeannette weighs 5.4 kg (compared to an average of 7 to 11 kilos at that age). The diagnosis is clear: "severe acute malnutrition", says the nurse, Maman Denise.

At the Kamayi health center, from October 2020 to March 2021, 74 malnourished children were treated. Only 47 were declared cured.

Anto Kalonga, 23, arrived with three children under his arms. Two have swollen bellies, yellowed and brittle hair; the third, also very thin, seems to have difficulty breathing. "He doesn't even have the strength to cry anymore," says his mother.

In these two health centers supported by Unicef, women are taught how to prepare porridge from local foods, corn, peanuts, caterpillars, palm oil...

"When a project stops, the situation falls back in this area where the agricultural population has aged," says Elie Mayiza Bamvangila of UNICEF in Kananga.

"The return of the displaced is becoming a burden for the community," he adds. On the outskirts of the city, more than 2,200 households are settled in an IDP camp, a scar of the 2016-17 conflict.

Since 2019, Vanessa Zawadi, head of the NGO Woman for peace and dignity (WPD) has employed the mothers of malnourished children in her fields.

"Every day I bought one or two coffins to bury the malnourished children. The parents wanted me to be like the organizations that distribute food (...) I made them aware of the importance of getting involved in agricultural activities and fish farming," explains Ms. Zawadi.