In Chad, women represent more than 50% of the total population and are a decisive electorate -- capable of tipping the scale in elections.

Although a law on parity already exists in the constitution, only 30% of women have their rights respected in the same way as men.

Candidate of the nation's ruling party Idriss Deby Itno promised women 50% parity during his visit to the 6th district commune of N'Djamena, an area mainly populated by women.

He addressed the crowd with charm:

"It's what the constitution says, it's not me, you voted for this constitution. The next 6 years it will not be 30% that we give to women, but it will be 50% to women."

Special correspondent for Africanews Joel Honoré Kouam reported from the jovial political scene on the ground.

"Women make up over 50% of the Chadian population. These voices will have an important and certain impact on the elections on April 11. So each party is revving up its strategy to convince women to vote for their candidate. Teams are on the ground night and day to raise awareness of the importance of this vote. The main means of attraction? Music!"

In Chad, a country divided between a Muslim north and Christian south, music is what brings people of different faiths and ethnicities together.

Tonight at the support office of the Convergence Victorieuse, music is aimed at women in particular.

"No one can win an election without women, and therefore it is the duty of anyone who wants to compete in Chad to have and integrate women with them.

A local female resident of N'djamena capital shared what her right to vote means for her as a woman.

"For us, it is a sense of responsibility and it will allow us to advance much more in our professional lives -- and also it is a chance for us to prove what we can do."

Although there is only one woman in the presidential race, Chadian women are very active in politics -- and call on the elected president to address electricity, drinking water and medicine access and improve living conditions. 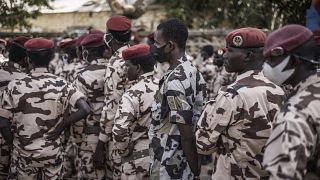