Tiana Major9 is writing about what she knows.

The 25-year-old Londoner has released a remix of her soul-drenched, contemplative song "Same Space?," which she describes as "a conversation I was having with myself at the time":

"So 'Same Space?' was basically about like being in a co-dependent relationship, one that's really unhealthy and you're fully aware of it, but you can't leave because you just depend on that person," she described, speaking via zoom from her home in East London.

"And I think it's something that everyone can relate to," she added.

Originally released in August last year, "Same Space?" features on Major9's remixed EP "At Sixes and Sevens – The Remixes," which is out April 2.

The video stays true to the themes of the song, showing two people intertwined yet unhappy, and stars Major9 herself. She also creative directs her videos, and discussed her vision for it.

"I told them, 'I need to disappear. However we do it, guys, I don't care. I just want certain parts. I just want to disappear throughout the whole video.' So yeah, they made it work," she said.

Major9's vocals recently featured on the soundtrack to Daniel Kaluuya movie "Queen and Slim." The track in question - "Collide" - was also nominated for Best RnB track at this year's Grammys.

"Oh my God, I'm a live performer. I love performing live. That is my thing. So, yeah, I just really want to be on the stage," she said. "I've done a few performances here and there, but obviously there's no live audience that I can see and connect with and stuff. So it's quite difficult, but fingers crossed hopefully they lift the ban and I can just travel and tour," she added.

"At Sixes and Sevens – The Remixes" by Tiana Major9 is out April 2. 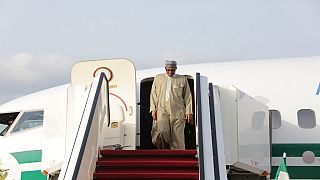