A human rights activist was arrested Thursday in Brazzaville ten days before the presidential election in the Republic of Congo, official sources said Friday.

Dr Alexandre Ibacka Dzabana, 77, coordinator of the Congolese Platform of Human Rights NGOs is accused of "wanting to destabilize the electoral process".

He was arrested Thursday by plainclothes security agents. according to his group (OCDH). His relatives in France also gave the alert Thursday to AFP.

"This is a kidnapping because he was arrested by unidentified men. The modus operandi is that of another era," Tresor Nzila said.

"We demand his immediate release. Now, if there is a regular procedure, we demand that he be guaranteed all the rights of the defense," Nzila added.

Dr Ibacka Dzabana was identified by his lawyer in the premises of the Central Intelligence and Documentation Center, the former Directorate General of Territorial Surveillance (DGST).

"But his lawyer was not allowed to speak to him," the NGOs lamented in a statement.

From an official source in the security apparatus, the activist was arrested because he was in contact with Congolese officers from outside whose mission is to destabilize the electoral process.

The presidential election is scheduled for March 21. Seven candidates have been campaigning for a week, including outgoing president Denis Sassou Nguesso, 77, including 36 cumulative at the head of the country. He is seeking a fourth term, a second since the reform of the Constitution of 2015.

His most prominent opponents are his former ministers Mathias Dzon and Guy-Brice Parfait Kolélas, who have become fierce opponents.

The NGOs are also asking for the release of journalist Raymond Malonga, director of an independent satirical weekly, very critical of the government, arrested in early February for "defamation". 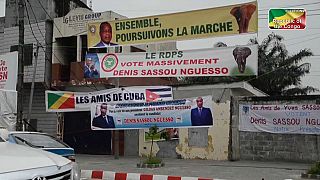