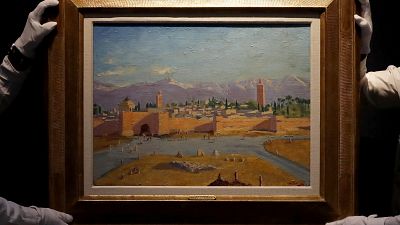 A painting of Morocco by the British wartime prime minister Sir Winston Churchill, which was owned by Angelina Jolie, has sold at auction for 8.1 million euros ($9,7 million).

Churchill painted the "Tower of the Koutoubia Mosque" while in Morocco during World War II in 1943 and later gave it to the former US president Franklin Roosevelt.

The two leaders were in Morocco for the Casablanca Conference, where they planned to defeat Nazi Germany and liberate Western Europe.

Christie's auction house said in a Tweet it was the only painting by Churchill during the Second World War.

The auction house also said it was a world auction record as the sale price was almost four times the top pre-sale estimate.

The sale also beat the previous record for a Churchill painting, which was just over 2 million euros.

"Tower of the Koutoubia Mosque is commonly regarded as the most important painting by Sir Winston Churchill, with its story interwoven into the history of the twentieth century," said the art historian Barry Phipps in the Christies catalog.

A career army officer before entering politics, Churchill started to paint relatively late, at the age of 40.

His passion for the translucent light of Marrakesh, far from the political storms and drab skies of London, dates back to the 1930s when most of Morocco was a French protectorate, and he went on to make six visits to the North African country over 23 years.

"You cannot come all this way to North Africa without seeing Marrakech," Churchill is believed to have told Roosevelt.

"I must be with you when you see the sunset on the Atlas Mountains."

After the US delegation had left Morocco, Churchill stayed an extra day and painted the view of the Koutoubia Mosque framed by the mountains.

He sent it to Roosevelt for his birthday.

Sold by the Roosevelt family in the 1950s, it changed hands several times before passing onto the now separated Hollywood couple Angelina Jolie and Brad Pitt in 2011.