The COVID-19 pandemic dominated discussion at the African Union summit this weekend almost a year after the first case was reported in Egypt.

Although the death toll is relatively low, about 4 percent of deaths worldwide, many countries now face a second, more serious wave.

As the outgoing president of the organisation, South Africa's president Cyril Ramaphosa said the continent faces an unprecedented social and economic crisis and despite IMF and World Bank support, access to loans on favourable terms are needed.

The global race for vaccines has also left African leaders worried, but preparations are underway to vaccinate 60 percent of the African population by the end of the year

"President Ramaphosa chairs the Africa Vaccine Task Team. This is the platform in charge of getting the vaccine for the African continent with at least 270 million doses," Angolan Foreign Affairs Minister, Téte António told Euronews.

The process of institutional reform of the African Union was also under discussion at the virtual summit.

"Certain objectives, such as strengthening coordination between the African Union and the Regional Economic Communities, have yet to be achieved," said António.

"The Commission's own institutional reform has also to be strengthened, i.e. at departmental level."

There were other changes to the AU at the summit.

Moussa Faki Mahamat, who faced no opponents was re-elected Head of AU Commission for years and the DRC's President Felix Tshisekedi becomes the African Union chairman for one year. He's said the "silence of arms" will be a priority during his mandate.

"The closest electoral process was undoubtedly for the post of Commissioner for Agriculture, Rural Development, Blue Economy and Sustainable Environment, which the Angolan Josefa Sako won- after a Moroccan candidate withdrew in the third round," said Euronews correspondent Neusa e Silva. 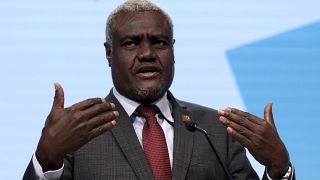