Hundreds of Libyans carrying the red, green and black national flag gathered in the Martyrs Square in the heart of the capital, long called "Green Square", where the deposed leader Muammar Gaddafi liked to deliver his speeches.

Banned from traffic the day before, the authorities deployed police vehicles and set up platforms where speeches and patriotic songs were to follow before the usual fireworks display at nightfall.

The head of the Government of National Unity (GNA) Fayez al-Sarraj and members of his cabinet, all of whom wore masks because of the pandemic, attended the midday police and military parade.

Independence Day, proclaimed by King Idriss on December 24, 1951, returned to the official calendar in 2012, after having been suppressed for 42 years under Gaddafi's regime. The latter was overthrown and then killed in October 2011 following a revolt.

Since then, the country has plunged into chaos and is today torn between two rival camps. The GNA based in Tripoli and backed by the UN, and one led by Eastern commander Marshal Khalifa Haftar.

A ceasefire signed in October under the auspices of the United Nations, and generally respected since then, has allowed the rival parties to return to the negotiating table. 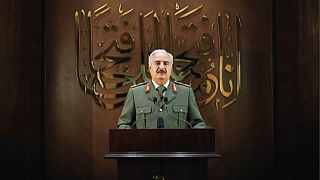