The trial of three soldiers accused of orchestrating a massacre — murdering 13 civilians including 10 children in Ntumbaw village, Cameroon in mid-February kicked off on Thursday.

The men appeared in Yaounde military court and are facing charges of “murder, arson and destruction of property, violence against a pregnant woman and disregard for orders.”

Dominique Fousse, the lawyer for the victims, shared a few words with the press.

"You probably heard me ask for a possible further investigation. Because it is obvious that there were people, as you have heard, and watchdog committees, who have not appeared before the bar to respond to facts that could possibly be brought before them. The international community was moved by this, as were human rights associations. We do expect justice for our clients. If the guilt of the young men presented to us is obtained... then justice is done."

The violence occurred in the Northwest Region, where an English-speaking separatist minority who declared independence in October 2017 has been embroiled in a bloody three-year conflict with security forces — with reports of wrongdoing on both sides, according to human rights monitor groups.

Cameroon is majority French-speaking with English speakers accounting for nearly a fifth of the national population of 24 million.

Most of this minority live in two western regions called the Northwest and Southwest, which were once part of British colonies in West Africa.

Decades of grievances at perceived discrimination between the two communities have culminated into this ongoing friction and tug of war. 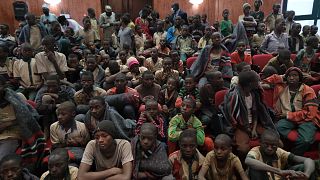