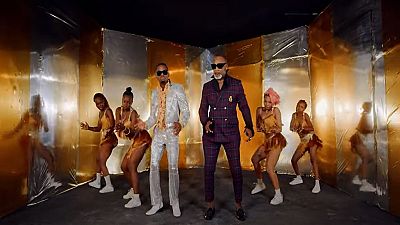 Tanzania’s superstar, Diamond platinum in a collabo with a Congolese king of Rhumba have made yet another Youtube history after garnering over a million views in just eight hours.

The new single on Youtube labelled as Waah, has also made another milestone to be the first African music video to clock two million views within 24 hours.

The video was directed by Director Kenny of Zoom Extra, a production company co-owned by Diamong and Kenny.

The Tanzanian maestro flew the Kinshasa based musician to Dar Es Salaam to produce the feature.

The song was written in a few days after his (Koffi) arrival which later lead to a video shooting. Diamond kept on updating his fans via his social media handle which include Instagram and facebook.

They first released the audio version on Youtube which garnered almost a million on its first day. He later released the video version of the song and had a traffic of a million within eight hours.

The video is characterized with lots of stylistic moves from both the artists especially Diamond who, together with his group showcase different African dancing style.