Economists are warning that large scale intervention is needed to rescue the Algerian economy from accruing huge foreign debt, following the double blow of COVID 19 and tumbling oil revenues.

The National Office of Statistics has reported a 3.9 percent fall in Gross Domestic Product in the first quarter of 2020 alone, with unemployment nearing 15%.

Finance Minister Aymen Benabderrahmane has estimated the losses of state-owned enterprises at over one and a quarter billion US dollars.

These have been described as 'alarming' figures, according to Mansour Kedidir, associate professor at the Higher School of Economics in Oran. He has urged authorities to introduce lower interest rates and tax cuts based on the number of new jobs created.

Professor Kedidir also called for major projects such as agro-industrial zones in the country's desert south, with processing infrastructure, extended railways lines and new towns to service them, all built with local manpower.

Kedidir predicts that otherwise, a "Pandora's box will be opened" accompanied by "riots, irredentism, religious extremism".

Economist Abderahmane Mebtoul also called for drastic action. While acknowledging that hydrocarbons will remain the main revenue source for the next 5-10 years, he insisted that an end to the economic crisis must involve new national and decentralised governance to "bring together all political, economic and social forces... (and) avoid division on secondary issues."

Mebtoul appealed for "a state-citizen symbiosis involving elected officials, companies, banks, universities and civil society in order to fight against a paralysing bureaucracy".

The International Monetary Fund (IMF) has forecast that Algeria's economy will shrink by 5.2 percent this year. In April, the organisation approved US$3.4 billion worth of emergency financial assistance to Nigeria to support the government's efforts in dealing with the same problems Algeria faces: the double impact of the COVID-19 pandemic and the sharp fall in oil prices.

But Algerian President Abdelmadjid Tebboune has already ruled out seeking loans from the IMF or other international financial bodies, to preserve what he described as "national sovereignty".

Algeria has painful memories of its 1994 deal with the IMF, which meant a structural adjustment plan resulting in massive job cuts, shutdowns and privatisations.

The government has said that it will launch an economic recovery plan and already decided at the start of May to halve the state's operating budget.

The president has insisted that the economic plan will preserve the social characteristics of the country and protect the purchasing power of citizens, especially the most vulnerable groups.

President Tebboune has also said he is confident that Algeria's financial capacity is sufficient to implement the plan. 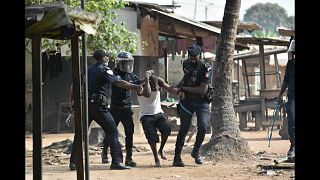