<p>The conquest of Europe by Africans. As the season draws to a close, many African footballers have been crowned champions in their respective championships. Leading the pack, Liverpool stars Sadio Mane and Mohamed Salah.</p> <p>A solid defender but in fragile health. The Ivorian international is worried by his many injuries. Since Eric Bailly’s arrival at Manchester United, the 2015 <span class="caps">AFCON</span> winner has missed no fewer than 64 matches and accumulated more than 365 days of out of action for his club.</p> <p>And then two guests on the show. Senegalese U20 international Moussa Kalilou Djitté. The Grenoble striker, who plays in the French Ligue 2, will talk about his first season in France and his ambitions for the future. Next is Ajara Nchout Njoya, one of the stars of African women’s football. We will talk about her season at club level, in Norway and the news of <span class="caps">CAF</span> canceling the 2020 Women’s <span class="caps">AFCON</span>.</p> <p>Our Wahany Johnson Sambou has the details of these and more on your weekly Football Planet.</p> 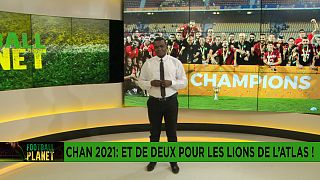