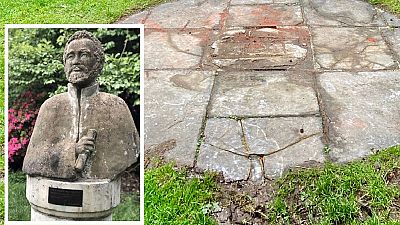 The Ethiopian embassy in the United Kingdom will restore a bust of the country’s last emperor in a London park. The bust of Haile Selassie was attacked by irate Ethiopians in early July. The Metropolitan police confirmed the incident and said it was investigating.

The toppled bust stood in the Cannizaro park located in London. Demonstrating youth were angered by events back home following the murder of Oromo artist and activist Hachalu Hundessa, he was gunned down in the capital Addis Ababa.

The deputy head of mission, Ababi Demissie, visited the site and announced late last Friday that: “the Embassy will work with the Ethiopian community and local council to restore the statue.”

Diplomats led by Deputy Head of Mission, Mr Ababi Demissie, visited the site where the statue of Emperor Haile Selassie once stood CannizaroPark. The statue was toppled last week.

The Embassy will work with the #Ethiopia|n community & local council to have the statue restored. pic.twitter.com/5cGmNjnIjM

Protests broke out in Addis Ababa and across the Oromia region after the killing of Hundessa as gangs engaged each other and security forces. Two people have been arrested for the killing whiles another is on the run.

Mass arrests have also been recorded with the combined death toll standing at 239. Internet was cut the morning after the shooting and at the time of filing this report had yet to be restored.

The Oromo diaspora has been actively campaigning since the murder seeking justice for the murder. In the UK, where a group of youths targeted the bust as a way of protest.

Haile Selassie, born Lij Tafari Makonnen was Emperor of Ethiopia from 1930 to 1974. He is revered as the returned messiah of the Bible, among the Jamaica-born Rastafarian movement.