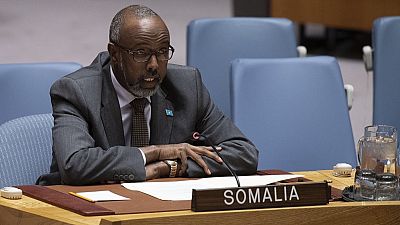 Somali has been elected Vice President of the 75th session of the United Nationals General Assembly, UNGA which will run for the year 2020 / 2021.

Turkish diplomat Volkan Bozkir was last week elected President of the session and he takes over from Nigeria’s Professor Tijjani Muhammad-Bande, who was president of the outgoing (74th) session.

Somalia’s permanent envoy to the UN, ambassador Abukar Osman will be occupying the position. It is not the first time the country is holding the top post. Its envoys have previously served in the 18th, 34th and 41st sessions, the Somali Mission at the UN said.

Ambassador Abukar is among 21 Vice Presidents for the 75th session of the UN General Assembly. The Vice-Presidents are elected according to a pattern that ensures equitable geographical representation, the UN Library says. Aside Somalia; Togo, Mali, Libya, Eswatini Cameroon are also serving as veeps from the African region.

Congratulations to volkan_bozkir of Turkey, for his selection as President of the 75th #UNGA session.

I thank the current UN_PGA, Professor Tijjani Muhammad-Bande, for his capable stewardship of the General Assembly at this extraordinary time.

Congratulations to the Somali government and people! Also, i would like to take this opportunity to congratulate the brotherly people and country of Turkey volkan_bozkir and you have our full support unga75, we are looking forward to working with you . #SomaliaAt60 #UNat75????

Somalia’s PR to the UN, Amb AbukarOsman1 has been elected the VP of the ??#UNGA 75th Session with support from UN members. Amb Abukar will preside over important affairs at the UN. Sincere congratulations to Amb Balle. It’s a testimony to the success of Somalia’s Foreign Policy

?? has proudly served in this capacity the following times:

My heartfelt congratulations to Amb AbukarOsman1 who was elected as the Vice President of the 75th #UNGA ?? has regained its diplomacy prominence.MofaSomalia MinisterMOFA SomaliaatUN pic.twitter.com/jqxWLwH4tl