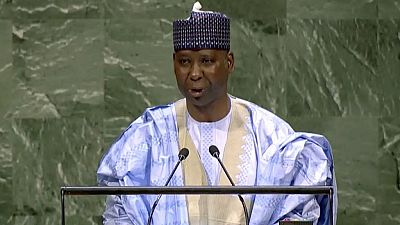 He becomes the 74th holder of the position taking over from Ecuardorian María Fernanda Espinosa Garcés whose tenure ended with Muhammad-Bande’s election.

Going by established principle of geographical rotation and relevant UN resolutions, the Presidency of the 74th session had reached the trun of Africa, hence Mohammad-Bande’s election was widely expected.

The immediate past president – the fourth woman to be elected to the post in the history of the world body – took office on 5 June 2018. She was also the first since woman 2006.

My sincere congratulations to HE Mr. Tijjani Muhammad-Bande #Nigeria, for his election as 74th #UNGA President. Amb. Tijjani brings with him an outstanding career both as scholar & diplomat. My team & I will be at your disposal to ensure the smoothest transition possible #UN4ALL pic.twitter.com/DO9JewU4kV

Having been formally nominated by the Nigerian government for the position, the then nominee went through informal interactive dialogues with the view to increasing the transparency and inclusivity of the process. The dialogue took place on 13 May 2019, at UNHQ, New York.

The last time Africa held the presidency was in 2014/2015 when Uganda’s Sam Kahamba Kutesa led the 69th session. Aside the normal sessions, the UNGA also calls for special and emergency special sessions that usually have different presidents.

READ MORE: Past Sessions of the UNGA