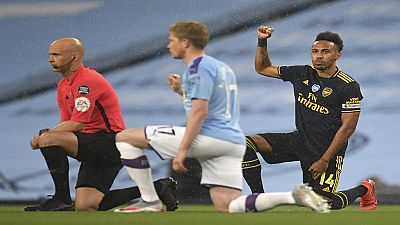 Players knelt in support of the Black Lives Matter movement and victims of the coronavirus were remembered as the Premier League made a somber return on Wednesday from a 100-day shutdown that deprived England of its national sport.

When Manchester City scored the first goals the Premier League had seen in more than three months, only health workers were in the stands to applaud.

For the last three months, it’s been the nation applauding the health workers.

In protective clothing, they were among only 300 people allowed into the Etihad Stadium for the game against Arsenal which helped end the Premier League’s 100-day shutdown on Wednesday.

The 55,000 seats that would usually be filled were instead empty, mostly covered by banners.

The only supporters seen celebrating goals from Raheem Sterling, Kevin De Bruyne and Phil Foden during City’s 3-0 win were on big screens in the stands, streaming live from their homes.

Back on the touchline at Manchester City was Arsenal manager Mikel Arteta, whose positive COVID-19 test led to English soccer’s longest suspension since World War II.

Britain is still trying to contain one of the world’s worst outbreaks of the coronavirus while also convulsed by a reckoning over racial injustice that roused the campaigning passion and anger of Premier League players following the death of George Floyd.

The symbolic move that will continue in this weekend’s round of games is being accompanied by demands from players for substantive changes to end discrimination and promote diversity.

After the opening whistle blew in the first game at Villa Park, every player took a knee in a tribute to Floyd, who was killed by a policeman in Minneapolis last month.

In Manchester, the same gesture took place just before kickoff in a near-empty stadium.

Supporters won’t be allowed into stadiums for the coming weeks at least.