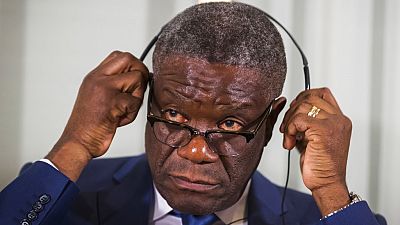 <p>Nobel Peace Prize laureate Dr. Denis Mukwege has stepped down from a <span class="caps">COVID</span>-19 task force in eastern Congo, saying his hospital needs to focus on treating coronavirus patients because testing delays and other problems have allowed the crisis to deepen.</p> <p>In announcing his resignation Wednesday, Mukwege said he expected virus cases to keep mounting in Bukavu, where his renowned Panzi Hospital treats survivors of sexual violence and provides other health care services.</p> <p>The surgeon said he now would “devote myself entirely to my medical responsibilities and to care for this influx of patients.”</p> <p>Mukwege’s statement outlined problems that had hurt regional coronavirus response efforts, including delays of more than two weeks on testing samples sent to a national laboratory in the capital, Kinshasa.</p> <p>The delay “was a major handicap for our strategy of ‘test, identify, isolate and treat,’” he said. The longer it takes to identify positive cases, the greater the risk that more people will be infected.</p> <p>Despite limited testing capacity, Congo already has reported more than 4,500 coronavirus cases and nearly 100 deaths. The virus was able to gain the upper hand initially because Congolese citizens coming home from other countries were not quarantined, Mukwege said.</p> <p>Without elaborating, the doctor also criticized “organizational weaknesses and inconsistencies between the various teams responsible for responding to the pandemic” in Congo’s South Kivu province.</p> <p>The emergence of <span class="caps">COVID</span>-19 in eastern Congo comes as the region has yet to declare victory over the world’s second most deadly Ebola outbreak in history, which has left more than 2,200 people dead since August 2018.</p> <p>Response efforts to that outbreak were severely hampered by rebel attacks and widespread distrust of incoming health teams after decades of armed conflict in the region. Health experts fear those challenges could complicate efforts to contain the coronavirus, too.</p> <p>A second, unrelated Ebola outbreak also emerged this month in the northern Congolese province of Equateur. Health officials in Congo are also grappling with the world’s largest measles outbreak, which has touched every province and left nearly 7,000 dead. </p> <p><strong><em>AP</em></strong></p>