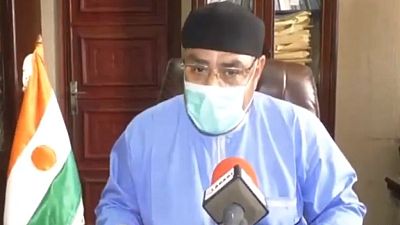 <p>Niger’s minister of employment and labour, Mohamed Ben Omar, died on Sunday, his party said, without stating the cause of death.</p> <p>He died Sunday afternoon at the main hospital of the capital Niamey, the Social Democratic Party (<span class="caps">PSD</span>) said on Whatsapp. President Mahamadou Issoufou said he learned the news with a “heavy heart.”</p> <p>Ben Omar, born January 1, 1965, in the south-central town of Tesker, had led the <span class="caps">PSD</span>, which is allied with Issoufou’s Party for Democracy and Socialism.</p> <p>Issoufou’s labour minister since 2017, Ben Omar began his political life in 1999 under president Mamadou Tandja, serving in parliament or in various ministerial roles in the poor Sahel nation.</p> <p>Ben Omar strongly supported a constitutional amendment that allowed Tandja to prolong his second term by three years in 2009, but a military junta overthrew Tandja the following February.</p> <p>Before he created the <span class="caps">PSD</span>, Ben Omar was part of the Rally for Democracy and Progress, the party of Tandja’s predecessor Ibrahim Bare Mainassara, who was assassinated in 1999 by members of his own bodyguard.</p> <p><strong><em><span class="caps">AFP</span></em></strong></p>