Escapee delays countdown to Ebola epidemic in the DRC 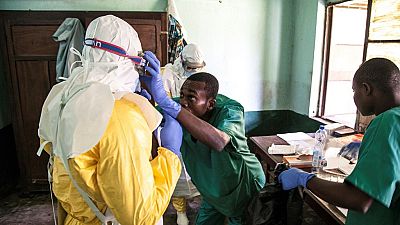 <p><strong>The latest Ebola patient was discharged from hospital on Sunday in Beni, eastern Democratic Republic of Congo, where authorities are searching for another patient who has escaped, delaying the end of the epidemic.</strong></p> <p>A seven-year-old girl was discharged on Sunday from the Ebola Treatment Centre (<span class="caps">ETC</span>) in Beni, where she was admitted on 13 April, an <span class="caps">AFP</span> correspondent reported.</p> <p>She was the last patient, according to the World Health Organization (<span class="caps">WHO</span>), which the day before Saturday spoke of “only one confirmed patient” at the Beni <span class="caps">ETC</span>.</p> <p>“No new confirmed case of Ebola virus disease has been notified for the 7th consecutive day,” the <span class="caps">WHO</span> added.</p> <p>However, the health authorities cannot restart the countdown to the end of the epidemic (42 days in total, twice the maximum incubation period of 21 days).</p> <p>“We are going to start counting the 42 days from the moment we find the escapee who escaped from the response teams,” Beni Deputy Mayor Modeste Bakwanamaha told the press.</p> <p>He appealed to the fugitive’s relatives: “May the family who are guarding her say that she is responsible for the misfortunes of the town of Beni and the province of North Kivu.</p> <p>The <span class="caps">DRC</span> was on the verge of declaring an end to the epidemic on Monday 13 April.</p> <p>But a new case was declared by the authorities on Friday 10 April.</p> <p>In total, the Ebola haemorrhagic fever epidemic has killed 2,279 people in 3,461 cases (3,316 confirmed and 145 probable) since it was officially declared on 1 August 2018.</p> <p>More than 300,000 people have been vaccinated.</p> <p>The tenth epidemic on Congolese soil is the second most serious in history since the identification of the virus in 1976, after the 2013-2016 epidemic in West Africa (more than 11,000 deaths).</p> <p>The <span class="caps">DRC</span> has also recorded a total of 442 cases of Covid-19, including 28 deaths since March 10, most of them in Kinshasa. Five cases have been recorded in North Kivu, including two in Beni. All were declared cured in this province.</p> <p><strong><span class="caps">AFP</span></strong></p>

We are going to start counting the 42 days from the moment we find the escapee who escaped from the response teams.