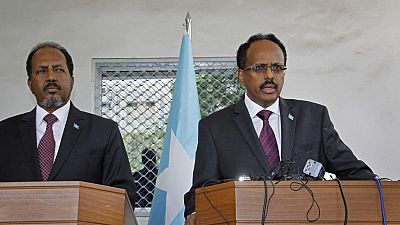 He was weighing in on a recent incident that saw the country’s intelligence outfit label one of Somalia’s top journalists, Harun Maruf, as a national security threat.

In a tweet on Monday, the 8th president of Somalia wrote: “Security agencies that threaten the journalists and leaders who mislead the public through fake news and investing heavily unethical social media propaganda is a recipe to dictatorial tendency which is the demise of any nascent democracy like ours in Somalia.”

National Intelligence & Security Agency (NISA) posted a tweet on April 2 declaring Maruf, an employee of the Voice of America (VOA) as a security threat. The tweet further stated that the journalist had committed “acts outside the media discipline.”

Security agencies that threaten the journalists and leaders who mislead the public through fake news and investing heavily unethical social media propaganda is a recipe to dictatorial tendency which is the demise of any nascent democracy like ours in Somalia.

Torrent of support for Maruf

But soon after the tweet was posted, a torrent of reactions followed slamming the intelligence outfit for targeting the journalist who is a key reference point with respect to news on Somalia and the wider East and Horn of Africa region. He is also the co-author of a book on the insurgent group, Al-Shabaab.

“For me, Harun Maruf will always Remain as the best investigative journalist. he always uses his profession and connections to get information and interviews to uncover deep truth. You can disappoint him, but we will never,” one tweet response read.

The Federation of Somali Journalists, FESOJ, reacting to the news said it: “strongly condemns the online smear campaign to discredit the investigative VOA journalist Harun Maruf by the Somalia’s intelligence agency (NISA) which threatens on Thursday to take legal action against him for having links deemed “threat” to national security.”

The U.S. Embassy in Somalia and a number of press rights groups have called the designation an attack on press freedom and independent media. Somalia year in and out ranked among the most dangerous places to practice journalism by the Press Freedom Index published by Reporters Without Borders.

Amnesty report on dangers of being journalist

A few months back, human rights group Amnesty International reported that journalists in Somalia are “under siege”, facing bombings, beatings, attacks and arrests.

The East African nation has long been seen as one of the riskiest places to work as a journalist, with the twin threats of reporting on conflict and draconian restrictions imposed by the authorities.

But now the situation is getting even worse, Amnesty said, in a report titled “We live in perpetual fear”, detailing what it called a “dramatic deterioration” in press freedom.

“A surge in violent attacks, threats, harassment and intimidation of media workers is entrenching Somalia as one of the most dangerous places in the world to be a journalist,” Amnesty said, calling on the government to take action.

Journalists face threats on all fronts, from attacks by Somalia’s Al-Qaeda-allied Al-Shabaab fighters, to the internationally backed authorities.

However, Somalia’s government rejected the report, calling it a “fabrication” and “ludicrous allegations”, and accusing journalists who had fled the country of making up stories to secure asylum abroad.

“We find no concrete evidence worthy of accusing the Federal Government of Somalia of abuses against journalists,” the Ministry of Information said in a statement. At least eight journalists have been killed since 2017, and at least eight more fled the country fearing for their lives, the report said.