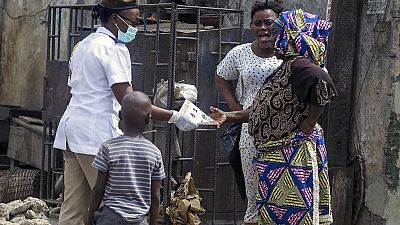 Lagos, Nigeria’s commercial hub, is the country’s most impacted with coronavirus infection. As of April 3, Lagos alone accounted for 98 out of 190 cases recorded across Africa’s most populous country.

The state government led by governor BabaJide Sanwo-Olu weeks back announced a stimulus package to cushion the less vulnerable members of the state.

But at one of the many food distribution points, the crammed nature of the crowd in compact, crowded queues was a far cry from social distancing regulations which have been repeatedly announced as a key prevention measure against the virus.

The state government said it had budgeted for 200,000 households to receive food rations. Nearly 1.2 million Lagos residents could receive this donation, authorities have said. Whiles recipients thanks the government for its efforts, on social media; the atmosphere at the distribution was a grave source for concern.

A beneficiary said after receiving her package: “I’m so happy that my country remembers me. This is the first time I’ve received anything from the government. I am so happy. God will continue to bless them in the name of Jesus.”

For the authorities, this distribution of food is a response to the health emergency decreed in the country because of the coronavirus.

Gbolahan Lawal, Lagos State Commissioner for Agriculture told the media: “In response to the emergency situation we have, COVID-19, considering the fact that we already have a lockdown, we want to reduce contact between people. So we decided to stimulate the economy. Stimulating the economy is in terms of food. Emergency food response.”

The federal government imposed a lockdown on Lagos, Ogun States and on Federal Capital Abuja, in a bid to curb the spread of the virus which has so far claimed two lives in the country. 20 people have also been discharged.