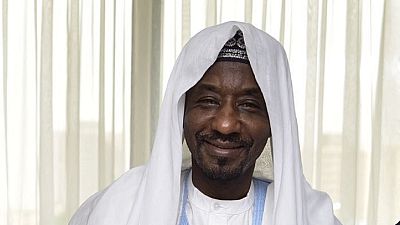 On Monday (March 9, 2020) Emir of Kano State in northern Nigeria was dethroned by the state government citing insubordination and his actions impugning on the cultural and religious norms of the Emirates he occupied.

Several events have since taken place, this article seeks to follow the sequence of events from when he was flown out of Kano to central Nasarawa State where he is being kept in the town of Awe.

Some key incidents that have taken place include

Muhammadu Sanusi has made his first comments after he was released from detention, addressing the process of dethronement which he described as “unprofessionally done.”

God gave me that chance, I have done what I could in six years, I'm moving on; I didn't want to go back. So frankly, the truth is if I wanted to go back, the letter (dethronement) was so badly written. This was so unprofessionally done.

He also stressed that he was moving on with his life as hard as the incidents have been and that he was also not interested in challenging the deposition despite knowing that he was likely to get a court to overturn it.

“There is no reason at all to be depressed. I know it is difficult but for me it wan’t an issue at all. And if you look at the reasons given for removing me, so insubordination to political authority, yah, big deal!

“God gave me that chance, I have done what I could in six years, I’m moving on; I didn’t want to go back. So frankly, the truth is if I wanted to go back, the letter (dethronement) was so badly written. This was so unprofessionally done.

“It is the easiest thing in the world to go to court, fair hearing (at a) High Court, just like today (referring to Friday’s court ruling granting him freedom to leave detention). It’s simple fair hearing. Did you query him, did you tell him, did you ask him to defend himself?

“Did you even call him to ask him any question, no. “But I think we should go on with the new phase in life,” he added. the video is believed to have been shot on Friday but reached social media on Saturday.

He is currently at his private residence in Lagos. He was accompanied to Lagos by Kaduna State governor Nasir El Rufai. He received the audience of one of Nigeria’s influential clergymen, Pastor tunde Bakari on Saturday.

After the Lagos presentation of These Times, Malam Nasir elrufai and Pastor Tunde Bakare led a team to visit HH Muhammadu Sanusi II who arrived in Lagos last night pic.twitter.com/yMjaNKo2Js

Malam Nasir ⁦elrufai⁩ has escorted HH Muhammadu Sanusi II to board his flight to Lagos pic.twitter.com/wYpgYZrGUK

Ousted Emir, Muhammadu Sanusi, is on his way to the national capital Abuja after he was released from detention following a federal High Court orders of Friday.

Visiting Kaduna State governor posted photos of himself and the Emir heading to Abuja after leaving Awe in Nasarawa State. Nasarawa shares a border with Abuja. It is believed that the Emir would likely continue to Lagos from Abuja.

The ousted Emir had earlier led prayers at a local mosque in Awe after receiving El Rufai at his residence. Sanusi had been banished to Nasarawa after his dethronement by the Kano State government on Monday.

Despite asking to be allowed to leave for Lagos, security operatives insisted they had orders to relocate him to Nasarawa. His lawyers filed a case on Thursday against his detention which achieved an order for him to be freed pending hearing of the substantive case later this month.

Police and the local spy agency in Nigeria have been ordered to release the former Emir from detention. A federal High Court sitting in Abuja ruled that holding him was illegal and that he had the right to move according to his wish.

The judge also ordered that the police and other government officials be served with the order for release. The Emir is currently in Awe located in the Nasarawa State where he was moved to and is being held illegally according to his lawyers.

The substantive motion on th case is to be heard on March 26. Meanwhile, Kaduna State governor, Nasir el-Rufai as at Friday was heading to Awe to visit the deposed Emir. Reports on Thursday had said he was due to visit.

He has since Sanusi’s dethronement offered him two posts, as Chancellor of Kaduna State University and head of the state’s investment outfit. The Emir is said to have accepted both roles.

Malam Nasir elrufai is on his way to Awe to visit HH Muhammadu Sanusi II pic.twitter.com/xLzwJ3EmDY

Muhammadu Sanusi II (privately known as Sanusi Lamido Sanusi) has through his lawyers sued the state security apparatus over his evacuation from Kano and ‘forced resettlement’ in town of Awe in Nasarawa State.

Hours after his dethronement and what an aide to the Kano State governor described as ‘banishment,’ the Emir’s lawyers demanded his immediate release failure of which they were going to resort to the courts.

His lawyers led by Lateef Fagbemi, on Thursday, filed a suit before the Federal High Court in the capital Abuja. The suit marked FHC/ABJ/CS/357/2020 is seeking an order for his release from the post-dethronement detention and confinement.

It is seeking an interim order releasing him “from the detention and or confinement of the respondents and restoring the applicant’s rights to human dignity, personal liberty, freedom of association and movement in Nigeria, (apart from Kano State) pending the hearing and determination of the applicant’s originating summons.”

Outspoken Emir of Nigeria’s ancient Kano State has been dethroned in a long awaited move following months of tension between him and the state governor.

Emir Muhammadu Sanusi II was dethroned by the state’s Executive Council special sitting that took place today. The council unanimously approved his dethronement according to a tweet by special assistant to state governor Abdullahi Umar Ganduje.

The Emir has held the post since 2014. He had previously served as Governor of the Central Bank of Nigeria, CBN. His outspokenness on critical social issues that was at variance with the state policy is believed to be at the heart of his rift with Ganduje.

A statement read by the Secretary to the state Government Usman Alhaji identified disloyalty as part of reason for the dethronement. A new Emir is to be announced later.

The former Emir was the subject of multiple anti-corruption allegations from a state mandated body. Analysts say the rift also led to the breaking up of the Kano Emirate into five emirates.

Lawmakers in May 2019 voted to split into five parts, a traditional, religious role of Emir of Kano. A leadership structure that dates back to 200 years.

The Kano State House of Assembly passed a law establishing four additional emirates and by that leading to the choice of four first class emirs in the state. As per the law, the state will have the following emirates: Kano Emirate, Rano Emirate, Gaya Emirate, Karaye Emirate and Bichi Emirates.

The Kano State Executive Council has unanimously approved the dethronement of the Emir of Kamo Mallam Muhammad Sanusi Ii at a special sitting held today by the council. pic.twitter.com/e9yMySVfbC

Muhammad Sanusi II was officially the 14th Emir of Kano, a religious and historic region in the center of Nigeria’s north. He ascended the throne after the death of his uncle Alhaji Ado Bayero who ruled as Emir for over five decades.