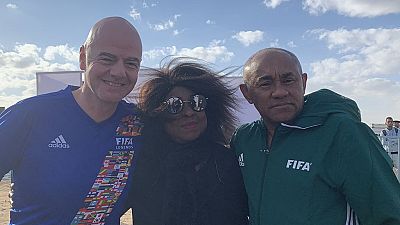 FIFA’s six months in control of African soccer appeared to end when Fatma Samoura’s temporary leadership of the continent’s governing body was not extended on Sunday.

Samoura, the FIFA secretary general, was dispatched to the Confederation of African Football (CAF) in August with the task of cleaning up the organization.

FIFA declared Samoura’s mission as “General Delegate for Africa” complete after a meeting of the CAF executive committee without mentioning the confederation’s president, Ahmad, who has been subject to an ethics investigation. Ahmad has faced accusations of sexual harassment and bribery, as well as claims of personal and financial impropriety. FIFA’s statement did not mention Ahmad.

Changes implemented during Samoura’s mission include enhanced financial controls, better salaries for staff and new ethics structures, FIFA said. Details of an audit of CAF were not publicly provided after the meeting in Rabat, Morocco.

“The six month mission agreed between FIFA and CAF to help accelerate the implementation of the reform process in the African governing body is completed with the delivery of a set of findings, recommendation and proposals,” FIFA said.

“FIFA is happy that the joint effort made with CAF was done and delivered within the initial proposed time frame and reiterates its commitment to be at the disposal of African football to assist in the process of raising its level to the top of the world.”

FIFA said it would work to create and finance a group of professional referees for Africa, ensure there is at least $1 billion available for the 54 nations to invest in infrastructure, implement unspecified governance changes and pursue changes to competitions “in line with the strategy” that was presented by President Gianni Infantino on Saturday.