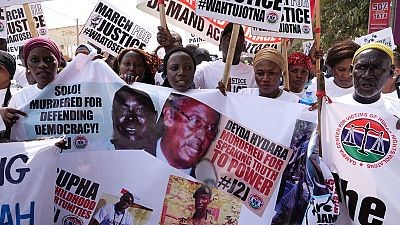 <p><strong>Hundreds of Gambians on Saturday called for the arrest and prosecution of the country’s former president Yahya Jammeh, arguing that the victims of his 22-year rule deserve justice.</strong></p> <p>Jammeh ruled Gambia with an iron fist but fled in January 2017 after losing a presidential election to relative unknown Adama Barrow which he refused to acknowledge before being forced out of power by a popular uprising.</p> <p>Wearing T-shirts that read #justicemustprevail, protesters marched in the outskirts of the capital Banjul, holding photographs of people killed or who have gone missing, including <span class="caps">AFP</span> correspondent Deyda Hydara, who was gunned down on 16 December 2004 by Jammeh’s henchmen.</p> <p>Maron Baldeh, whose husband lieutenant Basiru Barrow was executed in 1994, said she was at Saturday’s protest to call for Jammeh to be prosecuted.</p> <p>“We are sending message to government to act fast, because… justice delayed is justice denied. Yahya Jammeh should be arrested and put on trial.”</p> <h2 style="font-size:16px;">Ban Jammeh’s party</h2> <p>Nyima Sonko, 42, the widow of Solo Sandeng, a political activist who was arrested and tortured to death after he led a protest march for electoral reform, said: “We are calling on the government to ban the <span class="caps">APRC</span> from taking part in active politics.”</p> <p>“We want justice and we want it immediately,” they cried and demanding a ban on Jammeh’s former ruling Alliance for Patriotic Reorientation and Construction party (<span class="caps">APRC</span>).</p> <p>Since January 2019, some 190 witnesses have appeared before a Truth, Reconciliation and Reparations Commission (<span class="caps">TRRC</span>) set up to investigate abuses under Jammeh’s rule.</p> <p>The first year of hearings ended in early December, capping months of testimony about torture, murder, rape and witch hunts in the country of around two million.</p> <h2 style="font-size:16px;">Jammeh’s supporters</h2> <p>Last week, thousands marched on the outskirts of Banjul demanding Jammeh’s return from exile in Equatorial Guinea, as tensions heighten over Barrow’s decision to stay in office for five years — reversing a previous pledge to step down after three.</p> <p>Justice Minister Abubacarr Tambadou last week warned that Jammeh would “face immediate arrest and charges of the most serious kind” if he returned, including “crimes against humanity.”</p> <p>They argue he has a right to return under a joint statement from the African Union, the Economic Community of West African States (<span class="caps">ECOWAS</span>) and the United Nations, published at the time of his exile.</p> <a style="font-size:16px; font-color:yellow;" href="https://www.africanews.com/2020/01/20/jammeh-will-be-arrested-charged-if-he-returns-gambia-govt/"target="_blank"><span class="caps">ALSO</span> <span class="caps">READ</span>: Gambia govt says Jammeh will be arrested, charged if he returns</a> <p><strong><em><span class="caps">AFP</span></em></strong></p> 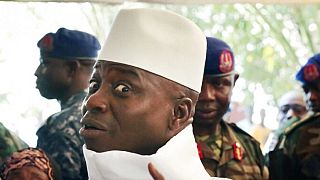 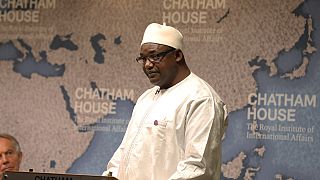 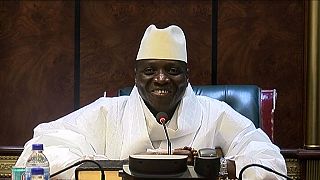