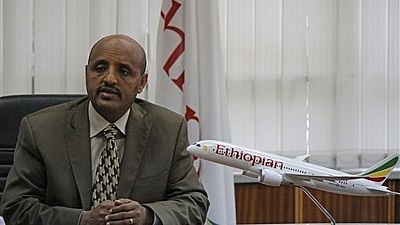 <p>Ethiopian Airlines, Africa’s biggest and most profitable national carrier continues to fly higher in the skies and even on land. The outfit last year inaugurated a huge hotel edifice, the Skylight Hotel, in Addis Ababa.</p> <p>Ethiopia’s current main airport is the Bole International Airport, named the biggest gateway of air traffic to the continent beating Dubai. Back in 2018, the carrier announced <a href="https://www.africanews.com/2018/09/29/ethiopian-airlines-plans-new-mega-airport-in-oromia-region/">plans to build a mega airport</a> in the Oromia region. </p> <p>At the time state-run Fana Broadcasting Corporate reported <span class="caps">CEO</span> Tewolde Gebremariam saying that consultation was under way with the Oromia regional state to acquire the land needed for the airport and an accompanying hotel.</p> <p>Gebremariam in a recent interview with another <a href="https://www.ena.et/en/?p=11795">local news outlet, <span class="caps">ENA</span>,</a> has given more details about the planned project. </p> <p>Back in 2018, the airline said the airport when fully operational will have an annual capacity of 80 million passengers. It was to be built specifically in the town of Bishoftu, about 48km southeast of the capital Addis Ababa.</p> <h2 style="font-size:16px;"> New details we have from the <span class="caps">CEO</span>’s chat with <span class="caps">ENA</span> </h2> <ul> <li>The structure will cover 35 square kilometer of land and will reportedly be the biggest airport in Africa.</li> <li>It is going to be bigger than Dubai airport and rival the Istanbul airport.</li> <li>Upon completion it will have an annual passenger handling capacity of 100 million with grand duty free shopping malls, hotels, logistics and training centers.</li> <li>A green light has been reached with the regional government for the “airport city” in Bishoftu specifically a place called Absera.</li> <li>The idea is to take pressure off Bole International Airport with the exponential growth of the carriers’ customers year in and out.</li> <li>Valued at $5m, it would be one of the biggest projects in the country, bigger than the Grand Ethiopian Renaissance Dam, <span class="caps">GERD</span>, project.</li> </ul> <h2 style="font-size:16px;">Quoted by the <span class="caps">CEO</span> </h2> <p>“We have not only survived but also we have grown. So all the targets that we have planned for vision 2025 are completed by 2018, we came up with new vision 2035 which is predominantly scaling up the growth and more fleet, passengers, destinations and particularly a new airport.”</p> <p>“Because Bole Airport is not going to accommodate us; we have beautiful expansion project, the airport looks very beautiful and very large but with the growth that we are going every year in about 3 or 4 years we are going to be full. So we have started now a new project around Bishoftu a place called Absera.”</p> <p>“We have identified 35 square kilometer land to be developed as an airport and it is about 5 billion <span class="caps">USD</span> project larger than the Grand Ethiopian Renaissance Dam (<span class="caps">GERD</span>). And it is going to accommodate 100 million passengers; larger than Dubai and more or less equal to the new Istanbul airport.”</p> <p>The airline is the continent’s biggest and fastest growing in the area of passengers and freight. In 2019 alone, it carried 12 million passengers and transported over 432,000 tons of freight grossing over $4 bn in the process.</p> <p>It also continues to expand its routes across the globe in a mark of consolidation. The airline also feeds a booming hotel industry in and around Addis Ababa. On a daily basis hundreds of travellers are sheltered in hotels as they arrive on transit in the capital Addis Ababa.</p>