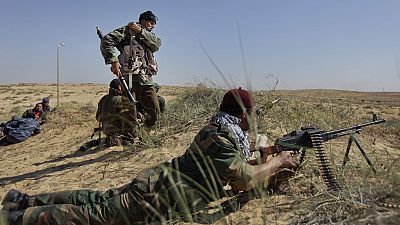 The Libyan conflict which has raged on since the ouster of president Muammar Gadaffi in 2011, has been shaped by several countries including the United States, Egypt, France, Italy, Russia and Turkey among others.

Russia and Turkey which support opposing sides in the long-running conflict have emerged as the latest influential players, mediating ongoing efforts to have a ceasefire.

Western powers are keen to stabilise Libya, home to Africa’s largest proven crude reserves, because of concerns Islamist militants and migrant smugglers, already active, will take advantage of the chaos.

Germany plans to hold to hold a peace conference sponsored by the United Nations, while French President Emmanuel Macron on Monday called for a “credible, lasting and verifiable” truce.

In this article, we take a look at the primary players in Libya’s complex battlefield.

The Tripoli government, named the Government of National Accord, controls the capital and some of western Libya.

It was set up in 2015 by the United Nations under the leadership of technocrat Fayez Sarraj. While officially backed by the U.S. and other Western countries, the GNA now largely counts on Turkey for military assistance in its struggle to repel Hifter’s forces. It also receives aid from Qatar and Italy.

For its protection, Sarraj’s government has courted local armed militias, which also staff and control many of its institutions.

Field Marshal Khalifa Haftar’s self-styled Libyan Arab Armed Forces control much of eastern and southern Libya. His forces draw on Libyan army units, local militias and tribesmen. Since April, they have been trying to capture the capital, Tripoli, from Libya’s weak U.N.-supported government. The escalating campaign has threatened to plunge Libya into violence rivaling the 2011 conflict that ousted Gaddafi.

Haftar’s east-based government, headquartered in the city of Benghazi, has gained the support of Egypt and the United Arab Emirates, as well as Russia and France.

Russia has stepped onto Libya’s battlefield and into the political vacuum left by Western powers. It allegedly dispatched late last year hundreds of mercenaries to boost Haftar’s halting campaign to take Tripoli.

Libyan and U.S. officials accuse Russia of deploying fighters through a private security contractor, the Wagner Group. Putin however says any Russians in the country are not in Moscow’s pay.

“Moscow wants to preserve its presence in Libya through Haftar, including its oil interests,” he said.

Turkey has propped up the embattled GNA, becoming increasingly involved in a proxy war against regional rivals Egypt and the United Arab Emirates, which support Haftar’s forces.

Turkey is seeking to safeguard its interests in the eastern Mediterranean as part of a broader competition for oil and gas drilling rights with other regional players. These include Greece, Cyprus, and Israel.

Ankara recently signed contentious maritime and military cooperation deals with the U.N.-supported government to create an exclusive economic zone across the Mediterranean, raising the financial stakes of its support for the GNA.

Last week, Turkish Parliament authorized a troop deployment to Tripoli, where it is already sending weapons and military experts.

As Libya’s former colonial ruler, Italy has for decades cultivated close economic and political ties with the North African country located just across the Mediterranean from the Italian peninsula. Recent Turkish and Russian involvement has raised concerns in Italy over its waning influence.

When the war broke out, Italy bet on the Tripoli-based government to protect its stakes in Libya’s vital oil facilities, including a natural gas pipeline, and to help stem the flow of migrants from Libya’s Mediterranean coastline, which is a major conduit for thousands making perilous journeys to Europe.

France’s relationship with Haftar has put it at odds with other European countries that have professed support for the Tripoli government. Although it officially denies backing Haftar’s forces, France views the general as a key political player and military chief whose control over most of Libya cannot be ignored.

France, which once colonised much of West Africa and still wields influence there, seeks to prevent Islamic extremists from gaining a foothold in the Sahel region, a potential powder keg it sees as threatening other North African countries and the Mediterranean.

The revelation last summer that French-owned missiles had been captured from Haftar’s forces compelled the country to acknowledge its presence in Libya, although it denied violating a U.N. arms embargo.

The United Arab Emirates and Egypt are longtime patrons of General Haftar, who they see as the best hope of stabilizing the troubled country and combating the Islamist threat on Egypt’s porous western border.

Despite a U.N. arms embargo, both countries deliver military aid to the LAAF, including powerful missiles and armed drones that have spurred Hifter’s advances.

Germany, in the middle of a two-year stint on the U.N. Security Council, has taken a central role in trying to kick-start a diplomatic drive to end the conflict in Libya. As Germany scrambles to curb the flow of asylum-seekers after a large influx in 2015, it sees a stable Libya as crucial to dealing with the migration crisis at the source.

It has repeatedly offered to host a peace summit in Berlin for Libya’s warring parties and their foreign backers. The goal is to find an end the 7-year civil war, halt foreign military interference and possibly move toward nationwide elections.

German Chancellor Angela Merkel visited Putin on Saturday and he supported her drive to hold a peace conference sponsored by the United Nations. Berlin said Monday the summit was planned for later this month.