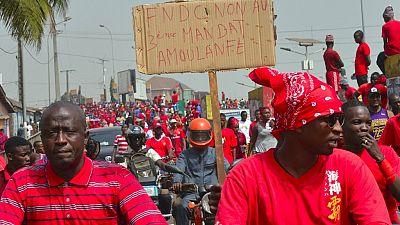 <p>One young protester in Guinea was shot dead and many others arrested Monday in the suburbs of the capital, Conakry, amid demonstrations against the president’s bid to seek another term in office, witnesses said.</p> <p>Guinean opposition parties called for the protests to be held in residential neighborhoods to avoid a mass gathering in the capital’s center after the government said such a march would be shut down.</p> <p>Young protesters burned tires in various suburbs, as most people stayed off the streets of Conakry to avoid any violence.</p> <p>In the capital’s center, several hundred demonstrators burned tires and put up barricades around the headquarters of the National Front for the Defense of the Constitution.</p> <p>Sporadic gunfire was heard across the capital and a high school student was shot dead by security forces, witnesses said.</p> <p>“Mamadou Sow took a bullet in the chest. His body was deposited in the morgue of a private clinic in the suburbs,” said Idrissa Camara who was at the scene. A local pharmacist, Lamine Balde, confirmed the death.</p> <p>The father of the boy who was shot, Mamadou Hasmiou Sow, said he couldn’t get to see his son’s body.</p> <p>“The body is in a clinic. But there is shooting everywhere. I couldn’t get there to see the body,” Sow told The Associated Press.</p> <p>Guinean security forces dispersed demonstrators who were blocking roads, said Mory Dioubate, spokesman for the ministry of security.</p> <p>“They threw stones at our forces. There have been arrests,” he said, unable to give the number arrested.</p> <p>The demonstrations follow the announcement last week by opposition groups that they will boycott legislative elections in February and will press to have them delayed if President Alpha Conde does not withdraw his bid for a another term in office.</p> <p>Tens of thousands of people marched last year protesting Conde’s plans to change the constitution to allow him run for a third term. At least nine people were killed in one of the October protests.</p> <p>“We will continue these demonstrations until President Alpha Condé renounces this new constitution and his desire to have a third mandate,” said Sidya Touré, the leader of one of Guinea’s opposition parties.</p> <p>Conde’s current term ends in December 2020 but he seeks a referendum to allow him to stand for a third term in the West African nation of some 12 million people. </p> <p>The 81-year-old Condé was elected to a five-year term in 2010 in the country’s first democratic transition of power since independence from France in 1958. He was re-elected in 2015 and according to the constitution should step down at the end of this year.</p> <p><strong><em>AP</em></strong></p>