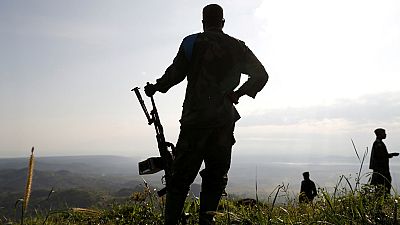 In the Democratic Republic of Congo town of Oicha, hundreds of angry citizens buried 27 victims of the latest massacre in the country’s volatile east.

Friday’s sombre burial followed deadly raids on communities by suspected Islamist rebels believed to have killed at least 100 people in the past month, according to U.N. figures.

At least four people also died this week during protests at the perceived failure of the army and U.N. peacekeepers to protect civilians from the Islamist Allied Democratic Forces (ADF).

Mourners gathered in silence around the tiny morgue of Oicha, located near the Ugandan border and east of the DRC town of Beni, the scene of repeated deadly strikes.

Workers wore face masks as they wrapped the decomposing corpses in shrouds. They were barefoot in line with local tradition out of respect for the deceased.

Wooden crosses marked the graves and many wept as the bodies were lowered.

During the mass funerals, gunfire broke out from the nearby bush but it was unclear who was firing.

“My neighbour, who was my son’s mother-in-law, had her throat slit and was then cut up,” said Kahindo Kamabu, a woman in her fifties.

“I am very sad but I’m not crying any more as I want to tell these murderers that we are strong and dignified despite our pain.”

Janvier Kasahirio, the head of a local youth association, said: “We found the remains of our brothers in pieces,” adding that some of the victims had been burnt.

He said they found the bodies in the bush.

The victims were hacked to death with machetes on Wednesday, taking to 107 the number of people killed in and around Beni since November 5.

The vast majority of the killings have been carried out by the ADF, a militia that has plagued the Democratic Republic of Congo’s east since the 1990s.

Anger against the ‘protectors’

The massacres have sparked protests against the local United Nations peacekeeping mission, known by its French acronym MONUSCO.

“It’s unthinkable that people kill the local population and that the young go to look for bodies while soldiers watch them,” said Moise Kakule.

On Friday, a DR Congo soldier was killed by civilians who mistook him for an ADF fighter, the army and a local official said.

The soldier opened fire as he saw local youth approaching him, before running out of ammunition, local leader Donat Kibwana added.

A general shutdown was observed in Oicha as well as in Goma, the main city in DRC’s east, in solidarity with the beleaguered residents of Beni and Oicha.

On Friday, the ADF released 12 hostages, including two women and some children, local residents said.

They said the released hostages carried back pamphlets exhorting locals to embrace Islam and stop cooperating with security forces.

Some said they had paid ransom to the ADF to secure the release of relatives.

The UN refugee agency meanwhile said there was an exodus of locals from Oicha to Beni, about 30 kilometres (20 miles) away.

“Alarming reports from the region suggest people being trapped and under threat from the armed groups, with daily reports of loss of life,” the UN High Commissioner for Refugees said on Friday.

“Abductions and attacks on schools, health centres and indigenous communities are also on the rise,” it said.

“Information is difficult to verify, as the movement of humanitarian workers is restricted due to insecurity around the city and in the territory of Beni, as a result of violence.”