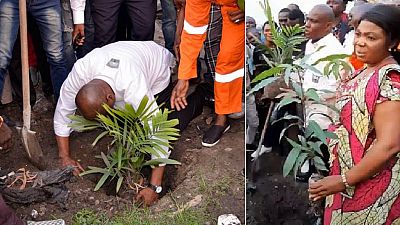 “Our forest burns! Since change begins with yourself, I invite you to follow my example and plant trees in your environment and to denounce practices that aim to reduce our “collective lung”,” this is the appeal of a top politician in the Democratic Republic of Congo, DRC.

Martin Fayulu, a former lawmaker and losing presidential aspirant in December 2018 elections is hoping to whip up an afforestation campaign to combat forest fires that have afflicted the country for months now.

Social media photos and videos showed Fayulu planting seedlings in parts of the country. He called on all Congolese to join his campaign to save the environment.

In August 2019, forest fires in the Amazon especially in Brazil turned global attention to the blaze. The Amazon rainforest is known as one of the lungs of the earth along with the Congo Basin in Africa.

Whiles Amazon was a star attraction of sorts, American experts disclosed that two African countries were suffering more fire outbreaks than Brazil was.

“Weather Source has recorded 6,902 fires in Angola over the past 48 hours, compared to 3,395 in the Democratic Republic of Congo and 2,127 in Brazil. It’s not an uncommon phenomenon for Central Africa,” a Quartz report said.

An AP report citing a South African academic said that although Angola and Congo dominate in numbers of fires, they often occur in sparsely wooded savannas and on fields cultivated by small farmers, making them less of a concern for deforestation than those in the Amazon.

According to Sally Archibald, a professor at Wits University in Johannesburg: “There are fire management questions in these (African) ecosystems, but fire is part of their ecology,” said Archibald, who studies fire management and savanna dynamics.

“In South America, the equivalent non-forest woodlands have been largely converted to soybean agriculture already, but in Africa they are largely untransformed.”