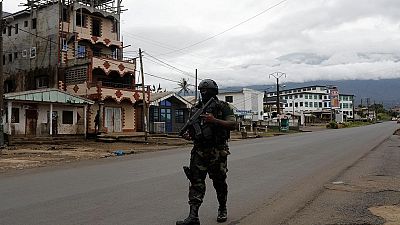 <p><strong>One month after Cameroon’s hyped Grand National Dialogue, the prospect of peace in the country’s Anglophone regions is still distant.</strong></p> <p>President Paul Biya called for national dialogue, and his government organised talks that took place from September 30 to October 4, leading to the adoption of dozens of recommendations to restore peace.</p> <p>The five days of talks were boycotted by most separatist leaders, but gathered more than 1,000 participants. They recommended “special status” for the North West and South West regions, home to most of the anglophone minority that makes up 16 percent of Cameroon’s population.</p> <h2 style="font-size:16px;">What the dialogue achieved</h2> <p>Biya, who has maintained authoritarian rule since 1982, hailed the resolutions from the dialogue as “rich and varied”. He promised that they will be “the object of attentive and diligent examination with a view to implementing them.”</p> <p>George Ewane, the spokesman for the national dialogue said that 58 fighters had laid down their arms in the South West earlier this month. </p> <p>“The situation gets better by the day… The grand dialogue has brought much comfort to people’s hearts.”</p> <p>An expert group is currently working on “the content of the special status” and the government is drawing up legislation to give shape to such status in practice, Ewane said.</p> <p>“We would like the bill to be put to parliament during the next parliamentary session,” he added, which is in November.</p> <p>Absent from the dialogue amid talk of his failing health, Biya surprised many by ordering the release of 333 detainees linked to the crisis, as well as 102 opposition activists arrested during peaceful protests against his re-election in 2018.</p> <p>Those freed included the president of the Movement for the Renaissance of Cameroon (<span class="caps">MRC</span>), Maurice Kamto, who challenged Biya at the polls and was released after eight months in jail.</p> <h2 style="font-size:16px;">What the dialogue is yet to achieve</h2> <p>According to Blaise Chamango, an activist in Buea, the capital of the South West region, schools in some districts “remain closed and inaccessible,” while “dead city” protest strikes imposed every Monday by separatist forces have not stopped.</p> <p>“The population in the crisis zones is still confronted with the same realities as prevailed before the dialogue,” he said.</p> <p>Several attacks by armed groups have been reported in the past weeks, notably in the North West, reputed to be the more rebellious.</p> <p>“Atrocities have resumed strongly in Bamenda,” the North West regional capital, Cameroon state radio declared last week.</p> <p>The anglophone population remains “rather sceptical”, said Chamango, “because they no longer have confidence in the government.”</p> <p>The country’s opposition leader Kamto argued that peace required “direct talks with the political representatives of the armed groups that control the terrain”.</p> <p>“The grand national dialogue does not seem to have brought a new and lasting solution to the demands of the anglophones regarding the shape of the state,” Kamto said as he came out of prison.</p> <p>At the end of August, the most influential separatist chief, Julius Ayuk Tabe, was given a life jail term by a military court in Yaounde, with nine of his supporters. From jail, he dismissed the dialogue as a “non-event”.</p> <p>But government spokesman Rene Emmanuel Sadi has said: “We don’t envisage any dialogue more inclusive than the one… that just took place in Yaounde.”</p> <h2 style="font-size:16px;">The Anglophone crisis</h2> <p>Armed anglophone separatist forces have clashed with government troops almost daily over two years of escalating conflict in the North West and South West regions of the central African country.</p> <p>The population has been hostage to the violence, which has claimed more than 3,000 lives in English-speaking parts of the mostly francophone country, according to the International Crisis Group. More than half a million people have abandoned their homes.</p> <p>The language split is a vestige from federation in 1961, a year after independence, when a British-ruled territory on the Nigerian border joined with the former French Cameroons.</p> <p>The federal system was replaced in 1972 by a united republic. Some separatists have long argued that centralised francophone power neglected the anglophone regions. In 2017, the tension erupted into violent conflict.</p> <p><strong><em><span class="caps">AFP</span></em></strong></p>