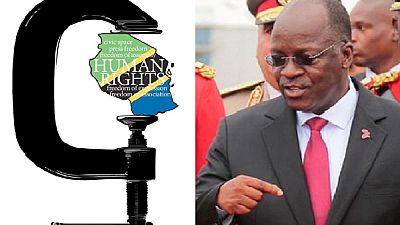 With one year to go before the next elections, repressive laws have created an uneven playing field for people challenging the ruling party, Amnesty International and Human Rights Watch say in separate reports released jointly.

Tanzania should show true commitment to protecting and fulfilling the rights to freedom of expression and association. The authorities need to put a stop to harassment, intimidation and arbitrary arrests of activists, journalists and opposition members.

Since his election in 2015 Magufuli has faced criticism for intolerance of dissenting voices in the East African nation.

“His government must repeal all oppressive laws being used to clamp down on dissent and urgently end human rights violations and abuses,” Ebole added.

“Tanzania should show true commitment to protecting and fulfilling the rights to freedom of expression and association,” said Oryem Nyeko, Africa researcher at Human Rights Watch. “The authorities need to put a stop to harassment, intimidation and arbitrary arrests of activists, journalists and opposition members.”

Human Rights Watch said it spoke to 80 journalists, bloggers, lawyers, representatives of non-governmental organizations and members of political parties for its report.

The rights groups said that since 2015, Tanzania’s government has stepped up censorship by banning or suspending at least five newspapers for content deemed critical. They include Tanzania’s major English-language daily newspaper, The Citizen, this year and four others in 2017.

In November 2017, a court in Dar es Salaam convicted Bob Chacha Wangwe, a human rights activist, for “publication of false information” under the law because he described the island of Zanzibar as a colony of mainland Tanzania in a Facebook post. His conviction was overturned by the High Court.

Regulations adopted in 2018 require anyone with a website to pay hefty license fees of up to 2.1 million shillings (more than $900), the reports noted. They also broadly restrict online content and permit surveillance of cybercafes without judicial oversight.

While amendments to the law introduced this year removed criminal liability for publishing non-official statistics, the authorities still maintain control of who can gather and disseminate statistical information, the reports added.