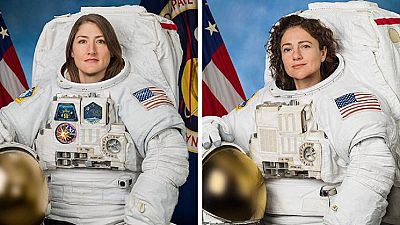 Astronauts Christina Koch and Jessica Meir will venture outside the International Space Station either Thursday or Friday to replace a power controller unit that failed over the weekend.

‘‘There are a lot of people that derive motivation from inspiring stories of people that look like them,’‘ Koch said when asked about the significance of women making strides in the space program.

‘‘What we are doing now shows all the work that went in for the decades prior, all the women that worked to get us where we are today. It’s really nice to see how far we have come,’‘ Meir said.

The first such mission was supposed to take place in March but had to be cancelled because the space agency had only one medium-sized suit at the time, with a male-female combination performing the required task at a later date.

Traditionally male-dominated NASA’s failure to be adequately prepared was denounced in some quarters as evidence of implicit sexism.

The new date was announced by administrator Jim Bridenstine in a tweet, while a blog post detailed the job at hand: swapping out a faulty Battery Charge/Discharge Unit (BCDU) with a new one.

The station is out of direct sunlight for much of its orbit and therefore needs batteries, and the BCDUs regulate the amount of charge that goes into them.

Spacewalks last several hours and are frequently needed to perform maintenance on the complex, the first part of which was launched into space by Russia in 1998.