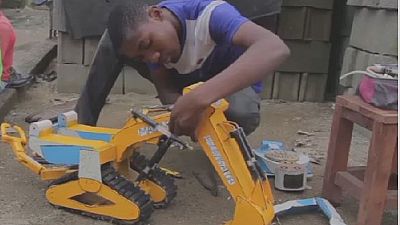 A Cameroonian teenager exhibits his toys on the streets of Douala. Chi Blaise,17,who hails from the northwest English speaking region taught himself how to build these remote-controlled toys.

“This work, it was the time that I was still small so I was trying to play with toys and there are parents that were buying toys for their children so our own parents didn’t have money to buy us toys. So, I was trying now to form my own of the — to create my own toys, how I can also play with it. How those other children play with it. So, I was doing them during Xmas period because those are the time that parents get toys for their children. So when I see those toys, I always try to fix mine”, Blaise said.

It takes Blaise about a week to two months to finish a project. Now, that depends on the availability of the materials he uses.

I don't have money to get the right ones so I decided to work for some dust bin and get the scrap deck, scrap radio....

“I get some of the material in dust bins, in scraps, radio and deck (DVD player) because I don’t have money to get the right ones so I decided to work for some dust bin and get the scrap deck, scrap radio and I pick cartons and some plywoods to combine them in my own way to have what I want like to have the caterpillar machine”, he added.

But sadly the bright young man has dropped out of school due to the ongoing Anglophone crisis in this Central African nation.

“I was in Bamenda and that crisis (Anglophone crisis) disturb. I was going to school so I decided to drop school because of the crisis. So, I have to look for a place that I can be comfortable there so that I continue doing what am doing because there am not comfortable there, why doing anything that am doing. So, I come to Douala so I can come and go to school and continue also with the research project”, Blaise said.

On the streets of Douala, his creations have impressed locals.

“This talent is really that of a genius. I really like this because when we were in school as kids, we thought of things like this as a miracle. We thought it was skills and secrets that belongs solely to white people but I see that in Cameroon we can industrialize”, said Douala resident Jean Mohammed.

Blaise brands his creations as ‘‘Chi Style’‘. He hopes to make drones and aircrafts that can fly short distances.