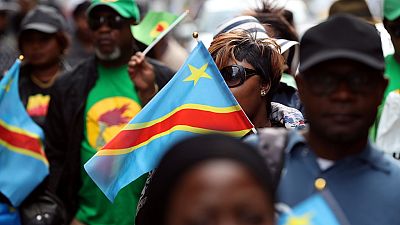 <p><strong>Some 36 activists of the citizen group Lutte pour le changement (Lucha) were arrested in Goma, in the eastern Democratic Republic of Congo, after demonstrations against the telephone operator Airtel, the movement told <span class="caps">AFP</span> on Saturday.</strong></p> <p>Thirteen were transferred to the central prison and 23 to the prosecutor’s office, a Lucha spokesman said.</p> <p>They are being sued for “harmful charges” (defamation) against the Congolese subsidiary of Airtel, an Indian telephone operator, according to this spokesman, Steward Muhindo.</p> <h3>Protester’s demands</h3> <p>They were arrested on Wednesday and Thursday after a sit-in earlier this week in Goma in front of Airtel, one of the three major operators in the <span class="caps">DRC</span>.</p> <p>Lucha had already mobilized in May to demand better services at more affordable costs in a country where average income does not exceed two dollars a day.</p> <p>Lucha also wants the operator to geo-locate child abductors in this city whose residentss regularly denounce insecurity.</p> <p>Lucha has received support from 36 Congolese human rights organisations.</p> <p>“It is deplorable to note that young people who remind Airtel of its obligations are physically assaulted, arrested and tortured, with the guilty silence of the leaders,” they wrote.</p> <h3>Government improving on human rights</h3> <p>The new President Felix Tshisekedi believes that he has improved the human rights situation since his inauguration on 24 January (release of activists, closure of illegal detention facilities, return of opponents, timid opening of the state channel <span class="caps">RTNC</span> to pluralism).</p> <p>Last week, he received a representative of the <span class="caps">NGO</span> Human Rights Watch, Ida Sawyer. The interview focused on “the progress made and the work to be done to improve respect for human rights and the fight against impunity,” according to the Twitter activist.</p> <p>This was her first return to the <span class="caps">DRC</span> since she was invited to leave in 2016 by the regime of former President Joseph Kabila.</p> <p><em><span class="caps">AFP</span></em></p> <p>(Picture: People hold flags as they protest the state visit of President of the Democratic Republic of Congo Felix Tshisekedi in Brussels, Belgium September 17, 2019. <span class="caps">REUTERS</span>/Francois Lenoir)</p>