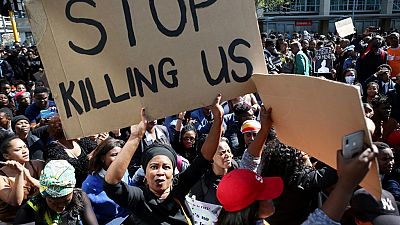 Women in Nigeria’s Port Harcourt this week took to the streets, protesting what they described as insufficient protection by the police, in the wake of a new wave of unresolved killings.

The protests in Nigeria, come hardly after a week after similar protests rocked South Africa. Indeed, women across the African continent have on several occasions protested the persistent kidnappings, murders and inconclusive investigations by the authorities.

In this article, we highlight some of the femicide protests that have been held in Nigeria, South Africa and Uganda over the last year.

The government can protect us.

Protesting against serial killings in Nigeria

Police in Nigeria are investigating the possibility that a serial killer is on the loose in the oil-rich city of Port Harcourt.

The investigations follow the killing of at least 8 women since July this year, all murdered in a similar pattern.

Women took to the streets, saying police was not doing enough to solve the mystery. All eight women were lured to hotels, before being strangled to death.

‘‘The women in Port Harcourt no longer feel safe, because we don’t know when we’ll be murdered. So we ask for protection. The government can protect us. They can do something,’‘ said one protester.

The police, who suspect that the women are being killed by cultists, caused outrage on social media, when they asked women to abandon prostitution, as one of the solutions.

‘‘We must go back to try to educate them and discourage them from going into prostitution because that is how they fall victim to these crimes,” deputy commissioner of police, Chuks Enwonwu told demonstrators, according to local reports.

Police has since ordered hotels in the city to install closed-circuit television cameras to monitor activity on their premises or face closure.

Earlier this month, the South African cities of Johannesburg and Cape Town were rocked by protests at the Stock Exchange and the World Economic Forum respectively.

The women were demanding that the private sector and the government do more to arrest the increasing number of women that are sexually assaulted and killed in South Africa.

Over the last 12 months, South Africa’s murder and sexual offence crimes rose to 3.4 % and 4.6% respectively, according to a police committee.

The World Health Organization said that in South Africa, about 3,000 women were killed in 2018 or one every three hours. This is more than five times higher than the global average.

The Women’s Minister Maite Nkoana-Mashabane said that more than 30 women were killed by their spouses last month.

South Africa’s president, Cyril Ramaphosa on Wednesday an emergency plan to stop the resurgence in violence against women, adding that South Africa was one of “the most unsafe places in the world to be a woman”.

Last year, the United States ambassador Deborah Malac and and her French counterpart at the time, Stephanie Rivoal, joined thousands of women, as they demanded police action to stop a spate of kidnappings and murders of women.

“My staff members are scared. They’re afraid to be out… because they don’t know if they’re going to be kidnapped or a victim of violence,” Malac said.

The women tasked the police to institute a dedicated team towards investigations of women kidnaps, and that this team should regularly update the public on the status of protecting women and holding criminals accountable.